Privacy has always been a thing that I think we naturally strive for. It is a basic human instinct. I suspect that very few, however, are aware of just how much personal data is shared around the world. Data is the new oil and I am afraid that profit comes before privacy.

There have been a lot of initiatives to combat this ‘data invasion’ which are well intended but typically end up being really annoying. As a digital marketeer, initiatives such as GDPR can end up being incredibly frustrating, as it can stop you doing things that do not feel invasive. Taken to the extreme, some of these initiatives can actually threaten a lot of what we do.

I was therefore interested to read of an Austrian ruling this week which basically outlaws the use of Google Analytics. This could obviously have *massive* implications for online marketing and I won’t deny that I find it a little unsettling, although I will confess that I struggle to really understand the implications for us all. As far as I can tell, it is only relevant to Austria and has not actually been cemented in law, but it could be a worrying sign of how tensions between the EU and the US could end up turning a bit silly.

You can read more about this at https://www.wired.co.uk/article/google-analytics-europe-austria-privacy-shield.

I wrote about page experience and why you should care about it last November.

The increasing relevance of this metric, as well as Google’s increasing support for webmasters, was illustrated this week by the news of improved transparency for desktop:

It is going to be interesting to see how rankings fluctuate in February. I will share any early signals as soon as I am able to.

Apple launched AirTag last year. Apparently, “AirTag is a super-easy way to keep track of your stuff. Attach one to your keys, slip another in your backpack. And just like that, they’re on your radar in the Find My app, where you can also track down your Apple devices and keep up with friends and family.”

It also, as it turns out, is the perfect way for stalkers to keep track of you. The little devices are very easy to hide / slip into your bag, giving others the ability to monitor your movements by tracking the device’s location. There have been numerous reports of this happening across the globe, since they were launched, but it seems to have all gone a bit public this week with the news of further court cases that suggest that the AirTags have facilitated very malevolent objectives.

It should give cause for concern but credit should be given to Apple, who have built in various features that aim to protect people from unwarranted surveillance. For example, you would be alerted if a device is constantly following you around. I have never even considered buying an AirTag but the grim truth is that you do not have to buy one to be exposed to the potential risks that small tracking devices pose, so it is hard to know what to do about it other than be vigilant and take any alerts seriously.

The SEO geek within me couldn’t help thinking how you would manage the negative publicity that they are attracting. That inner geek led me to noticing the meta description that is used on the main product page:

Hardly the positive message that I am sure Apple would rather be pushing?

If you know me well, you will know that I have been bitterly disappointed with the media (all forms, including larger online publishers and social media platforms) throughout the past two years. The lack of investigative journalism has been very sad to witness.

I have experienced, first hand, censorship on the likes of Twitter and Facebook for sharing data (normally official government data!) that does not necessarily support the official narrative. For example, any reference to how the weekly UKHSA vaccine surveillance reports actually indicate negative vaccine efficacy is met with a ‘computer says no’ rejection from the fact checkers and attempted ridicule.

I am someone who believes in transparency and I love a passionate, albeit respectful, debate where both sides of an argument have the opportunity to put their case forward and attempt to demonstrate why they are right. Censorship quashes this process and instantly makes me suspicious.

I was pleased, therefore, to see that the BMJ stand up to such censorship this week when they locked horns with Facebook. There has been a massive shift in the narrative over the past week and more questions are being asked about pretty much everything that we have experienced over the past couple of years.

The reign of the ‘fact checkers’ must be put under the microscope as they are not as objective as you may believe. Well done to BMJ for standing up for what is right.

I have always been amused by the mighty Cassetteboy ‘creations’. I also, perhaps surprisingly, like a bit of a Rage Against The Machine.

It will therefore be no surprise that I very much enjoyed the latest Cassetteboy montage, which arrived this week: 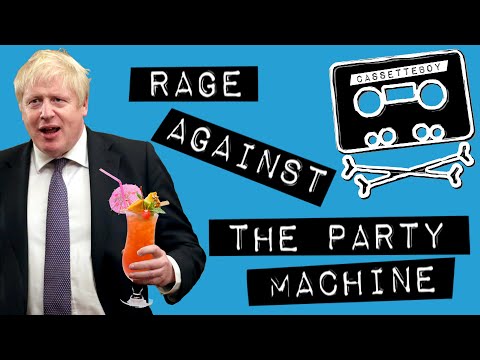 Have a great weekend, wherever you are.