I am not a gamer, but took my hat off this week to Sony for a great marketing stunt to mark the launch of the new Playstation 5 console:

From one iconic shape to four. We’ve given the Oxford Circus Tube signs a #PS5 upgrade. ? pic.twitter.com/iw9qlEXR7B

It is a big stunt but I fear that it will not be as impactful as normal with the current lockdown. It will have been planned for some time, so I can only imagine how frustrated those involved would have been when the second lockdown was announced. It is, however, great to see the online coverage and all is not lost.

2. Not another stories clone?

They say that imitation is the sincerest form of flattery.

Well, it would appear that Twitter admires the ‘stories’ feature that we have seen roll out over the years on Snapchat, YouTube, Instagram, Skype, and LinkedIn as the platform announced their own take on the time-limited post this week:

That thing you didn’t Tweet but wanted to but didn’t but got so close but then were like nah.

We have a place for that now—Fleets!

Rolling out to everyone starting today. pic.twitter.com/auQAHXZMfH

Twitter claim that Fleets is designed to increase enjoyment of their platform, as users will be less worried about retweets and likes, but I think it is fair to say that it has not been welcomed with open arms, with most people saying that they don’t need yet another vanishing post feature and some, such as US Congresswoman Alexandria Ocasio-Cortez, even stating that it makes Twitter more stressful:

Does the fleets thing stress anyone else out? Like I use Twitter to get away from IG stories, not have it follow me around on every platform reminding me that I don’t have makeup on

Whatever your views on whether the world needs yet another stories clone, the rollout has not gone well with many users criticising the lack of security and there have been widespread reports of app crashes. The result? Twitter is ‘slowing’ down the rollout:

We’re slowing down the rollout of Fleets to fix some performance and stability problems. If you don’t have the feature yet, you may not get it for a few more days.

We love that so many people are using Fleets and want to ensure we’re providing the best experience for everyone.

Not the best of weeks for Twitter, all things considered.

3. New home for the disavow tool

Google’s search console is a must-have tool in any webmaster’s toolbox. It has been subject to a fairly lengthy overhaul over the past couple of years – the ‘old’ version was officially closed down over a year ago but not all existing functionality had been migrated at that point, so some features lived on, but on old URLs.

This week saw the announcement that the disavow tool has finally been migrated and polished (a bit):

Today we're completing the migration of the Disavow links tool to the new Search Console interface ?

? Improved interface
? Download a disavow file as a text file
? Error reports for uploaded files are no longer limited to 10 errors

The disavow tool allows you to upload a list of URLs that currently link to your website but which you want to wash your hands of. It was born in response to demand from the SEO community following the Penguin algorithm update, which introduced penalties for spammy links, and is a popular tool for sites that have a questionable history of link building.

Although you need to use it with caution, there is no doubt that it is an essential consideration when undertaking any form of link detox and it is great to see that it has been given some TLC from Google and that there is continued investment in the features available in Search Console.

I have found myself being drawn to the live tracking map of the 2020 Vendée Globe this week.

For those that may not know, the Vendée Globe is a single-handed, non-stop, round the world sailing race. It is a serious test of man and machine and you may be surprised to know that far fewer people have completed a solo circumnavigation (199) by sailing boat than have been in space (550).

I love my kitesurfing but am not really into sailing as such, but I find the drama of the Vendée Globe irresistible and modern technology gives us incredible access to the action. Not only can you track the position of the fleet at any moment, but there are also frequent video updates from the sailors that give you an amazing insight into the challenges that they face, such as this (amazingly relaxed) update from the British (and current leader) Alex Thompson: 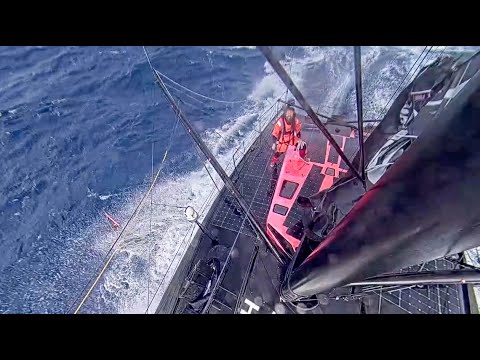 I am sure that the video links, from some of the remotest corners of the planet, must help maintain the sailors’ sanity and it was brilliant to see the veteran Jean Le Cam having fun with a video update when he used a virtual background to make it look like he was sitting in an empty bar rather than a spartan racing yacht in the middle of nowhere.

Go, go Alex. It is a marathon, not a sprint, but I will keep watching you and willing you on to victory. It is about time that someone who isn’t French claims the title!

Did you know that today is National Absurdity Day?

I must admit that I didn’t know, until about an hour ago, nor do I know much about absurdism so I enjoyed reading https://nationaltoday.com/national-absurdity-day-november-20/. It is a good read if you want some inspiration for your absurdist aspirations.

To be honest, I feel as though we are living in a fairly absurd world and am not sure if we need to encourage more insanity, but I do wish you a very happy absurdity day :-)