This week’s My Five is by Olivia.

Although the next android update isn’t due until much later this year, Google revealed a quirky new feature. Android users will be able to ask Google Assistant to read web pages aloud, in a chosen speed and language. 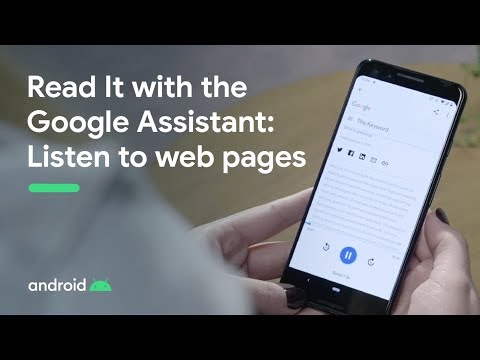 Other than being ideal for lazy readers, such as Generation Z who has an attention span that doesn’t even rival a goldfish, it is part of the digital world’s big push to make the internet more accessible and inclusive to those with disabilities. Well done, Google!

If you don’t want your pages to be read aloud for various reasons, then you’ll need to add this meta tag:

The update won’t just aid webpage accessibility but it will also further enable globalisation and digital unity by choosing what language to be read in. If you’ve ever studied a language or lived abroad, then you’ll know that listening is a core part of linguistics. This will certainly be handy for understanding languages with unfamiliar scripts like Russian, Arabic or Mandarin.

Although, you may be pretty aware that Google Translate is quite literal and cultural phrases tend to get lost in translation, so I’m not sure how accurate the feature will be. For example, one of my favourite Spanish idioms is “aburrirse como una ostra”, which is their version of saying “I’m really really bored”. However, Google will translate and read this as:

Do oysters get bored? Who knows, but hopefully BERT will get this sorted out soon and we won’t have to simplify webcopy.

Twitter football fans are a notoriously prickly community and generally best avoided. However, sometimes you have to be brave and poke the bear, get it right and your content can go viral with little to no effort. That’s the magic of ‘footie banter’.

Recently, we’ve seen the fast-food industry heating up with Burger King testing the advertising boundaries. So much so, that it has driven KFC to confront Twitter’s football fans head-on by laying into their beloved Premier League teams in a thread that compares them to KFC menu items.

It’s daring but pretty funny if you follow the Premier League. We Brits love self-deprecating humour, so this went down much better than the Snickers thread “A place in Wales or someone sat on a keyboard” which was featured in last week’s My Five.

I have to applaud this effort, it’s simple but well-targeted – I imagine there is a significant overlap between KFC and premier league fans who would happily sit down to watch and debate a game over a bargain bucket. It does make me wonder if they researched which team had the most KFC supporters before they started dishing out insults?

3. The king of COVID-19 memes emerged

So we managed to get this far without talking about the coronavirus, but there’s a 17-year-old superhero who definitely deserves a mention in this week’s My Five.

Developer and designer William created a website in just 24hrs that generates hand washing instructions to the lyrics of a song of your choosing. It’s not hard to get behind a young-genius that may have eliminated countless sick days by making hand washing both fun and customisable.

I was getting bored of singing Happy Birthday twice over, so All-Star by Smash Mouth now decorates the Browser Media washing facilities. It’s been a mixed but applauded reaction.

Like all good memes, brands are leaping onto this bandwagon, with McDonald’s, The Book of Mormon, and even the mighty Netflix US the latest to join the fad by creating their own personalised posters. Watch this space, we may have just witnessed the new and improved Zuckerberg!

4. Google, Facebook and Amazon will be slapped with a digital tax

It has long been criticized that various US tech giants, such as Amazon, pay little to no tax to the UK, despite generating revenue from British Citizens. In Wednesday’s Budget, the Chancellor announced that enough was enough.

France recently introduced a 3% digital tax, which caused a bit of an uproar with Trump who’s now threatening to impose tariffs. However, it would appear that the UK is following suit by introducing a 2% digital tax to online companies (with revenues greater than £500m, and £25m coming from British users). The tax will come into effect from April 2020 and include activities such as the provision of social media platforms, search engines, and online marketplaces.

As we cut ties with the EU, it is bold to agitate our neighbours sitting just across the pond. I think though, the Chancellor is perhaps inspired by Hugh Grant in Love Actually, who makes this speech in the film whilst address the US President:

“We may be a small country but we’re a great one, too. The country of Shakespeare, Churchill, the Beatles, Sean Connery, Harry Potter. David Beckham’s right foot. David Beckham’s left foot, come to that. And a friend who bullies us is no longer a friend. And since bullies only respond to strength, from now onward, I will be prepared to be much stronger. And the President should be prepared for that.”

If you listened to the budget, there is some overlap between Sunak and Grant’s speech, for example, they both talk about Shakespeare. I’m also sure this was how the Chancellor felt that evening:

I can’t see the likes of Google scaling back its operations because of the tax but I am interested to see how they and the US react.

Whilst on the topic of the budget, did anyone else notice it magically changed colour as it left Number 10? Witchcraft!

As #Budget2020 is upon us, is it strange that I’m extremely preoccupied with the Chancellors Rishi Sunak magically changing folder colour. Watch closely. pic.twitter.com/kDDkivasg5