It’s been a tough few weeks for Facebook following the Cambridge Analytica scandal and Mark Zuckerberg’s subsequent Congress hearing. However, while Facebook’s reputation may have taken a hit, it’s revenue doesn’t appear to have suffered the same fate.

Earlier this week, Facebook released its earnings report for the first quarter of 2018 which displayed a 50% increase in ad revenue, in comparison to the same period last year. In addition to this, the number of daily and monthly active users has increased by 13%, despite a large portion of Facebook users stating they are going to use the platform less.

With the rise in ad revenue and growth in users, it appears that Facebook is weathering the storm following the recent data privacy scandal. However, the backlash from users and advertisers didn’t truly start until towards the end of the quarter, so the next few weeks/months will give us a true understanding of how this controversy has affected Facebook.

This week marked the arrival of a new member of the Royal Family as the Duke and Duchess of Cambridge announced the birth of their third child. As expected, the imminent arrival of the new addition to the Royal Family sent social media channels into meltdown, with people all across the UK (and the world) talking about it. The speculation around the name of the new Prince was finally put to rest this morning as his name was revealed – Prince Louis Arthur Charles.

News outlets all over the country were rushing to be the first place to cover the announcement of the birth and break the news once Kensington Palace revealed his name. However, it was BBC who took the crown as they managed to get a quote from the new Prince just hours after being born.

Royal baby: 'New mums have so much unnecessary pressure' https://t.co/qipOKED2Ec

It’s amazing how much he has learnt in such a short period of time!

Have you ever dreamed of packing your bags and exploring everything the world has to offer? Well, thanks to Icelandic airline, Wow Air, that dream could become a reality this summer. Wow Air is on the hunt for two friends to send on a trip of a lifetime travelling the world for three months – while making money.

The airline is running a competition looking for two people to move to Iceland and travel the world while producing content and travel tips for Wow Air’s Travel Guide. The pair will have the opportunity to travel Iceland and visit different places around the globe while blogging/vlogging their trip and creating a range of travel tips to go on the Wow Air Travel Guide website. Sounds amazing right? Well, it gets better – they are paying a monthly salary of £2,885 throughout the trip and all travel and living costs are covered by the airline. Are you interested? You can enter here.

The competition is a win-win scenario for Wow Air as they are getting loads of good coverage off the back of it, and the winners will create a ton of great content for their site. Could we see more companies opting for a similar strategy to their influencer marketing/content creation strategies in the future?

4. BrewDog left with a bitter taste in its mouth

It seems to be a common theme in my My Fives to talk about another social media fail from craft beer company, BrewDog. This time they have taken to Twitter in attempt to get one over their Scottish rivals, Tennents – but once again it backfired.

It all started with a cheeky jab from BrewDog…

So it's a square go in Glasgow. Beer-related class war sparked in the comments. @BrewDog vs @TennentsLager. I love beer and fighting. I never knew there was another level. Beer fighting. pic.twitter.com/jDp6wquepu

…but they didn’t seem to be prepared for such a quick response from their unexpecting target, and their customers.

When your annoying wee brother tries to bam you up but really he's just crying for attention… #Bless #Bothered ???
?
?
?https://t.co/BNA1dQ4ixF

With no comeback, BrewDog resorted to the great idea of simply deleting their original tweet and pretending none of this ever happened – the internet equivalent to taking your ball back and going home. If there’s one thing you can take from this whole scenario, it’s be prepared for retaliation when calling out your competition online – or alternatively, don’t do it in the first place.

There doesn’t seem to be a day go by without a new news story covering Facebook’s data privacy scandal – and I know I’ve already spoken about it in this My Five.

However, the guys over at Bad Lip Reading have worked their magic and uncovered what was really said during Mark Zuckerberg’s hearing earlier this year. 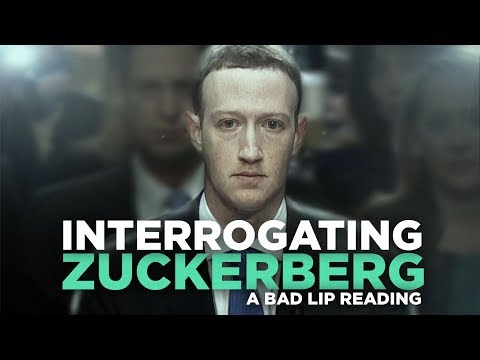