1. Explaining the internet to old people

Mark Zuckerberg spent two days this week being questioned by US Congress, following the massive data scandal that currently surrounds Facebook. The Facebook CEO was grilled on everything from privacy to diversity, by a panel that was evidently unfamiliar with the inner workings of Facebook and the internet in general. Enjoy this video while I check my Whatsapp emails.

New research by Pew Research Center has revealed an estimated two-thirds of tweeted links to popular websites are posted by bots, not human beings.

The study argues that while bots can play a valuable role on Twitter – such as answering questions or publishing news feeds – they can also do a lot of harm, particularly in shaping political opinions and skewing big data.

A separate report showed that during the first two presidential debates in the lead up to the 2016 US election, a third of pro-Trump tweets and nearly a fifth of pro-Clinton tweets came from automated accounts. Not only is this pretty scary, it also reinforces the notion that data cannot always be trusted, particularly on social media.

The report makes for some very interesting reading, check it out here.

The music video for Luis Fonsi’s ‘Despacito’ recently became the first video on YouTube to reach 5 billion views. But just 5 days after this staggering milestone was announced, the video disappeared, and was replaced with an image of several masked figures holding guns.

This was the result of a hack on the Vevo YouTube channel by a group calling themselves Prosox and Kuroi’sh. More than a dozen other artists were also affected, including Selena Gomez, Taylor Swift, and Drake.

The videos are now back up, including Despacito, with play count figures fully intact. Wonderful.

4. Search appearance gets another update

Google recently launched a new version of its Search Console tool, along with a much-improved version of the old Search Analytics offering, the Search Performance report. While the reports are still in Beta, they provide a much better user experience and offer a wealth of valuable search data, if you know where to look for it.

The Search Performance report’s most recent update comes in the form of The Search Appearance filter, that lets users filter their data by rich results including AMP non-rich results, AMP articles, job listings, and job details. I expect this list will evolve in time.

This new reporting feature is going to be extremely useful for site owners looking to monitor the performance of their rich results in Google’s search listings. If you can’t see this feature in your account yet, don’t panic, it will be rolling out soon.

There’s a famous old saying in TV that goes something like ‘never work with children or dogs… or swimming pools’. On Wednesday morning during coverage of the Commonwealth Games, BBC news reporter, Mike Bushell, demonstrated why such a saying exists, after he took a hilariously awkward tumble into the swimming pool that was being used to host an interview with members of the England swimming team. Well played, Mike; gold medal for styling it out like a pro. 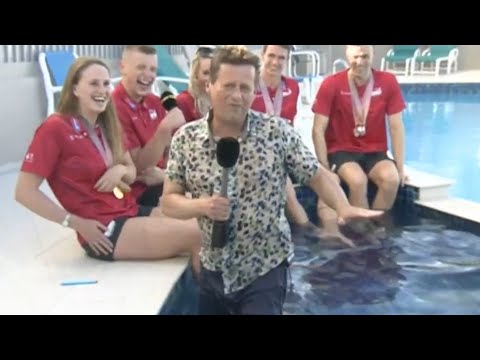