Skip to content
You are reading: Drogba-esque cheating? As if…
25th May 201226th May 2022
Browser Media, Fantasy Football

Back in July 2011 the idea of starting a Fantasy Football league bounced (excuse the pun) around the Browser Media office. Back then I knew absolutely nothing about football, but as there was a prize to be won, a hot air balloon ride for two, I half-heartedly chose my team to take part.

I was not expecting my squad to do very well at all, hence the team name ‘The Dizzee Rascals’, as I assumed my team would perform like a bunch of sugar-fueled children.

However after starting off reasonably well I did become a bit more enthusiastic about the competition, especially when I discovered that a friend of mine was a bit of an expert, and he later agreed to help me with my squad selection in exchange for half the prize. And after 38 weeks of matches and a very close battle between first and second place, between us and runners up ER Legends, we finally came out on top: 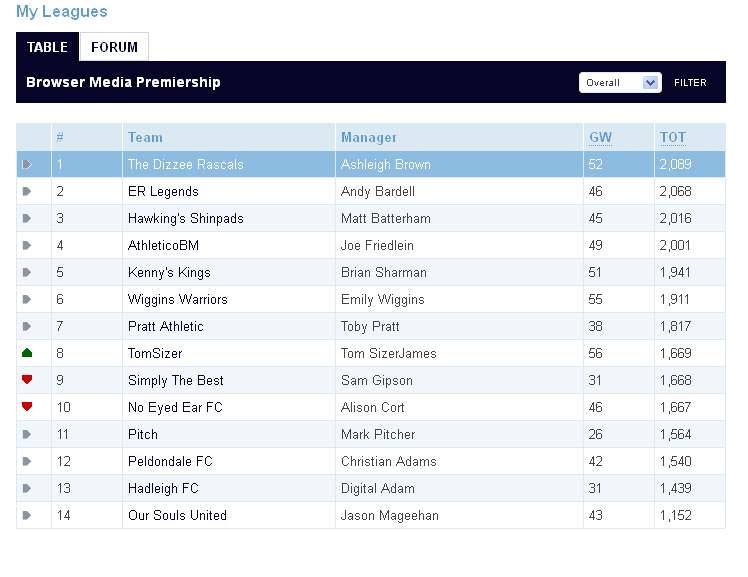 Some may say that as I had outside help this should be classed as “cheating”, however I like to think of it as being resourceful. Really the guys in the office can’t stand the fact that they were beaten by a girl in a football competition so therefore accused me of “Drogba-esque cheating” ;). But the truth is I would have been able to get through the season without them knowing the source of my success if the “Wiggins Warriors” hadn’t dropped me in it with just a month-or-so to go until the end (obviously I would have come clean eventually, but it was fun teasing them when they thought it was all me).

Now my football expert friend and I have a hot air balloon ride to look forward to, courtesy of Browser Media, and will soon be floating over the Essex countryside. I’ll be sure to post some pictures and comments about our experience afterwards.