Skip to content
You are reading: What is the deal with clickbait?
30th March 201626th May 2022
Clickbait, Content, Copywriting, Journalism

Clickbait, according to the Oxford English Dictionary, is “content whose main purpose is to attract attention and encourage visitors to click on a link to a particular web page”.

For what it’s worth, I don’t like this definition much. It doesn’t take into account the fact that, as Digital Marketers, we’re all trying to attract attention and encourage visitors to click on a link. Why you gotta play like that, OED?

Computer Hope provides the following definition for clickbait headlines: “catchy or provocative headlines that are difficult for most users to resist and often have little or nothing to do with the actual web page” and coupled with Ben Smith of Buzzfeed’s simple “a headline that doesn’t deliver on its promise” I think we’re just about there.

We should be careful not to dub something clickbait, just because we don’t enjoy reading it.

There’s a difference between disagreeing with an article’s content after having your interest piqued by a sensationalist headline (maybe, as in the example above, you don’t like what the ‘expert’ said), and being disappointed/angered when an article’s content doesn’t deliver what the headline promised (Brandon Stanton just had his open letter shared over Facebook, no one was “destroyed”).

So, what drives users to click, even if they know what they’re clicking is clickbait? Professor George Lowenstein developed “the information gap theory of curiosity”, which describes curiosity as behaviour that’s triggered when we identify a gap between what we already know and what we want to know. Clickbait headlines play on our compulsion to learn more and take action to do so. Lots of people (like the guys above) see it as a low-brow, manipulative way to obtain clicks but, as others have shown, it can totally work.

Should you be using clickbait headlines to reach visitors?

Ergh… Tricky. A snappy headline plays a massive part in helping users decide whether they should take the time and make the effort to read your content. On the other hand, if you always rely on dishonest, clickbait-y headlines that take the user through to a weak, irrelevant article, you risk losing their trust and their loyalty, which could severely impact your credibility. Are the short term gains in traffic worth the potential cost in the future? Enticing a user is a great idea, disappointing them is not.

Want to know more? Well, I enjoyed this short documentary on clickbait by firmbear. Perhaps you will too? 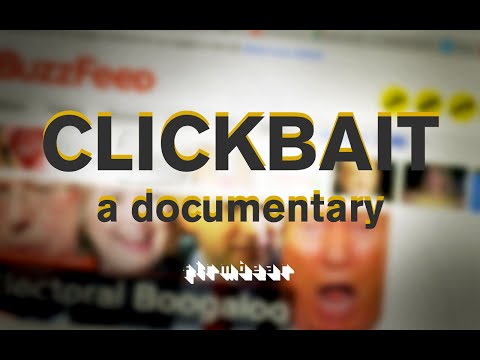