I often find myself reflecting on bad weeks for Facebook when writing My Five posts. The tech giant is most definitely not immune to some fairly bad PR facepalms and there are plenty of daggers out there ready to be plunged into its back.

In a move that is no doubt designed to distance itself from some of this hate, it was interesting to read about an imminent rebrand for Facebook this week. There is no official word as yet but Zuckerberg has been very open about his desire to build the metaverse so a move similar to Google reorganising under the Alphabet umbrella would not be surprising and it would protect (slightly?) the other group initiatives from the potentially huge negative association with the social media platform.

They have an annual conference on the 28th October, so we may have to wait until then to find out more but I suspect that the rumour mill will be in full flow until any official announcement.

2. Guess who is back

Momentum is gathering for a new social media platform that is to be launched by a certain former POTUS.

In true Donald Trump fashion, it is to be called TRUTH Social. I just love the capital letters – much louder. I hate to say it but, in principle, I am loving everything that I hear about it. The promise of a ‘non-cancellable’ community platform that encourages an open, free and honest conversation is one that resonates with me, although the proof will of course be in the pudding.

I am sick to death of censorship and political bias of pretty much all news / social media outlets at the moment and we need to get back to transparent debate without the threat of censorship, which has been disgustingly rife in recent months. Trump is promising that TRUTH Social will “stand up to the tyranny of big tech”, accusing them of silencing all opposing voices.

It is obviously a lofty ambition and only time will tell if it works, but if anyone has the bravado and budget to give it a shot, Trump has to be on the short list?  One to watch with interest and I suspect he will be a thorn in many sides once armed with a new loudhailer.

Some fairly staggering numbers being suggested. A valuation of $45 billion would dwarf the $26.2 billion that Microsoft paid for the purchase of LinkedIn in 2016. Pinterest was valued at about $13 billion when it went public in 2019, so the offer of $70 per share reflects the success of the platform in recent years, fuelled especially by a massive surge in DIY interest whilst everyone was locked in their homes.

Why would PayPal want to buy a digital pinboard site for such a massive sum?

The payments behemoth is in a very strong financial position following an extremely successful Covid season. PayPal shares have risen about 36% in the last 12 months, giving it a market capitalisation of nearly $320 billion, so $45bn is small change. The acquisition would allow PayPal to diversify its income through advertising revenue and capture the e-commerce growth that is being seen on social media platforms.

4. The slow, inexorable death of the high street

I walk in to Colchester’s town centre pretty much every day to stretch the legs, get some fresh air and top up on caffeine levels.

I am usually lost in my thoughts but I found myself noticing just how many shops are closing down at the moment. It is really quite sad to see how quickly they are disappearing and I was cursing the impact of lockdowns. The reality, however, is that the rot started well before the Gov decided to destroy small retailers. The shift online has simply been accelerated.

It was therefore very timely to read a report about how over half of UK consumers are planning to shop exclusively online this Christmas. The data is from the annual Consumer Insights survey conducted by Outbrain, which I always find interesting. Head over to the MarketingTech site for a summary of the 2021 findings.

I was amused to see the first ever ‘Balloon World Cup’ this week, which was hosted in Spain.

Yes, this is a pimped up game of keepy uppy  with a balloon. The rules are very simple. You are not allowed to stop your opponent getting to the ball and you must hit the ball in an upward motion (i.e. you cannot blast it down to the ground as you would in volleyball). For the world cup, a set was created that looked like a living room, but a car was introduced for the final. Obviously…

It proved to be fiercely competitive and made for surprisingly tense viewing. Twitch claimed over 8million views, peaking with over 600,000 concurrent viewers for the final, which saw Peru’s Francisco De La Cruz beat Germany’s Jan Spiess 6-2: 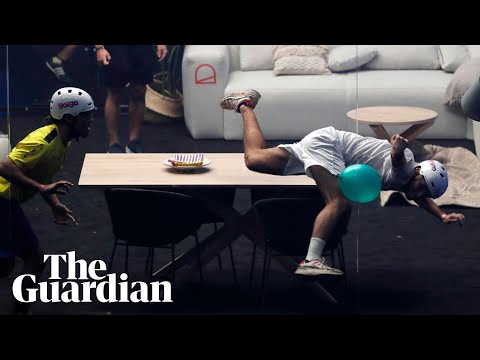 Have a great weekend everyone :-)