1. Wayback Machine proves you can’t rewrite history and get away with it

Unless you’ve been living under a rock, you’ll be aware that in the last week it was reported that Dominic Cummings, chief adviser to old haystack bonce, was caught breaking the lockdown rules by driving 270 miles, with suspected COVID-19, with his wife and child to stay closer to family in case the kid needed looking after. Then he drove to a castle (more on that later) and despite being caught, held a press conference on Monday where he said he believed he acted reasonably and lawfully.

The whole of the UK, expecting an apology, not an excuse, rightfully went absolutely bonkers – a slap in the face for many who have been suffering for the past 10 weeks, and an insult to the memory of those who have died.

Anyway, that’s the backstory. But amongst those lies was another one. One that made it sound as though he knew all about the risks of Coronavirus as early as last year. He’d even written about it on his blog. Or had he?

Well, obviously, the answer is no. But what he did do was edit an old blog post so it looked like he was super on it and super indispensable because his super big crystal ball brain knew all about it before anyone else did.

However, good old Wayback Machine proved that you can’t rewrite history (not on the internet, at least).

Cummings said he warned about i.a. corona virus in 2019.

Thing is, he didn’t. References to SARS and corona virus were added to his blog post on pandemic risks sometime between April and May of this year. pic.twitter.com/NneonooLoj

Right. So like I said, Dominic Cummings drove to a castle. But why would you break lockdown to do such a thing, I hear you ask?

Well according to him, if your eyes aren’t working properly, the best thing to do is to jump in your Chelsea tractor and drive a 60 mile round trip with your wife and child in the car to go and see a castle. After all, who among us doesn’t think potentially going blind while behind the wheel, thus endangering our family and other road users isn’t the right thing to do?

Brewdog has commemorated his entirely sensible and necessary trip with a new beer – Barnard Castle Eye Test. The beer is a ‘hazy Durham IPA’, described as a ‘Short sighted beer for tall stories. Our New England, Old School IPA is locked down and loaded.’

All profits made on the beer will be used to fund its production of free sanitiser for the NHS & Health Care Charities. It’s currently sold out, but you can pre-order for the next batch here.

I must admit, I’ve gone all Laurence Llewelyn-Bowen in the past few weeks. If I’m gonna be sat at home for what could be forever at this rate, I might as well make it look a bit nicer, eh?

Since we have all been staying at home to protect the NHS and save lives (well, not all of us), Pinterest has seen a huge surge in people like me creating boards for DIY projects to tart up their house.

This is great news for Pinterest, as retailers have turned to the platform for advertising, hoping to benefit from the highest level of global engagement ever seen on the platform.

Tinfoil hats might be able to protect you from alien mind control, but to prevent dangerous 5G waves from penetrating your skull, you’re going to need some more advanced tech.

Thankfully, 5GBioShield, which uses a quantum holographic catalyzer to create some kind of magical force field will save you, and all for the low, low price of £339.60 (or £958.80 when you buy three)! But that’s not all! The USB device comes with a whopping 128MB of storage, and it’s backed by “research”, so you know it’s legit.

So, does it work? According to the BBC, who asked an expert to take the device apart, almost certainly not.

“So what’s different between it and a virtually identical ‘crystal’ USB key available from various suppliers in Shenzhen, China, for around £5 per key?” asks Ken Munro, whose company, Pen Test Partners, specialises in taking apart consumer electronic products to spot security vulnerabilities.

And the answer appears to be a circular sticker.

“Now, we’re not 5G quantum experts but said sticker looks remarkably like one available in sheets from stationery suppliers for less than a penny each,” he says.

With all the terrible things going on in the world at the moment, it must be difficult for the President of the United States to focus on what’s really important. In the last few days, COVID-19 deaths surpassed 100,000, and George Floyd was murdered by police, resulting in mass rioting.

These seem like very important things to be focussing on. But instead, Trump has decided to take on Twitter for slapping a little label on two of his Tweets, which were spreading misinformation about high levels of voter fraud for mail-in ballots.

Trump has now signed an executive order, which is aimed to remove some of the legal protections given to social media platforms. As it stands, if you break the terms of service, you can have posts removed, or your account suspended or banned. This has happened to many Conservative crackpots, but for valid reasons, such as creating numerous fake accounts, inciting hatred, encouraging violence, or for spreading false information that could be deemed dangerous or harmful.

Not only does doing this distract from the pandemic, but the whole thing also serves to rile up his base, who have been accusing social media platforms of ‘censoring Conservative voices’.

Anyway, that was a grim ending for a My Five, so to cheer you up, here’s a funny video of a dog, which pretty much sums up how I feel at the moment. 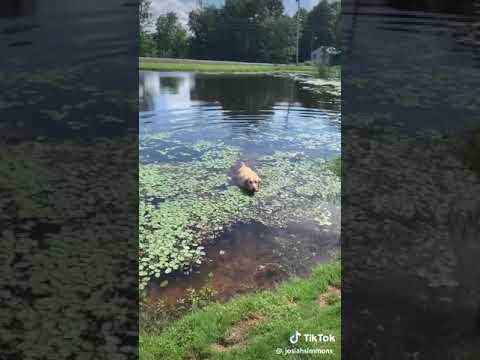