Primark, the cheapo clothing king of the high street, is suffering more than some other retailers during the coronavirus pandemic, reporting revenues of zero since stores closed on 22 March.

The reason? Primark, unlike its already struggling competitors, does not have an ecommerce site, which when you think about consumer shopping habits in 2020, is completely mental.

While this has allowed them to keep in-store prices low, the brand has gone from £650m monthly sales to absolutely nada, which will surely lead them to rethink their online strategy in order to survive?

Yes, you did read that right.

To support smaller retailers through troubling times, Google Shopping is now free. When Google Shopping began transitioning to a paid model back in 2012, after offering free listings for a decade, many brands saw their revenue take a massive hit.

The temporary suspension is great for small businesses, but also for shoppers, who may not have been able to find the products they needed as easily, with many companies not being able to compete with the big boys with big ad budgets to be shown in Google Shopping.

Google is also giving SMEs ad credits, and while the cynical side of me feels this is just to get smaller brands to continue to invest in Google Ads, it’s still a nice gesture, I suppose.

Wanna know how much wonga you’re gonna get, and when? Well, according to Google:

‘The ad credit amount will vary by customer based on past Google Ads spend, and the country and currency where the business and Google Ads account is set up.’

‘Starting in late May, we’ll begin rolling out the ad credit in phases. Over the following months, eligible customers will be notified and will see the ad credit applied in their Google Ads account.’

Will be interesting to see just how generous they are.

While this article was published in print a few months ago, I thought it was interesting enough to be mentioned this week, and besides, I only saw it being shared on social media this week, so it totally counts.

As Harvard Business Review reports, a study conducted by The University of Warwick, lead by Professor Andrew Oswald, took survey data on the life satisfaction of more than 900,000 citizens of 27 European countries from 1980 to 2011and compared it with data on annual advertising spending in those nations over the same period. And it found a correlation in the data; the higher a country’s ad spend was in one year, the less satisfied its citizens were a year or two later.

This led them to conclude that advertising makes us unhappy – but why?

When quizzed on how the researchers came to this conclusion, the answer was simple: People are constantly judging themselves and how well they are doing in life – whether they are trying to keep up with the Joneses, or indeed, the Kardashians.

Ads blast products into your eyeballs every day, trying to convince you that if you buy this shiny thing, your life will be better. Whether that’s stuff to make you look cooler, or younger, or wealthier, or more hench, or whatever other aspirations float your boat -, advertisers have a wealth of data on you, and can use this to appeal to you on an emotional level. Although shiny things may serve to bring sparks of joy through instant gratification, the feeling is not long-lived, as Professor Oswald explains:

‘The idea here is a very old one: Before I can decide how happy I am, I have to look over my shoulder, consciously or subconsciously, and see how other people are doing. Many of my feelings about my income, my car, and my house are molded by my next-door neighbor’s income, car, and house. That’s just part of being human: worrying about relative status. But we know from lots of research that making social comparisons can be harmful to us emotionally, and advertising prompts us to measure ourselves against others.’

With this in mind, the more exposed you are to advertising, which acts as a constant reminder of what you don’t have, the result is that ads make you sad.

4. 5G whizz – The idiots are taking over

One of the stranger conspiracy theories to come to light recently is that 5G is the cause of the coronavirus.

After noted conspiracy theorist David Icke appeared to discuss the topic on local TV channel London Live, the interview became widely shared on social media, racking up 6 million views and stoking fear among the tin foil hat wearing community.  This landed the channel in hot water with media regulator, Ofcom, with it stating that ‘London Live’s decision to broadcast the Icke interview “had the potential to cause significant harm to viewers in London during the pandemic” because his views were not sufficiently challenged by the host and viewers were not given extra context on the claims.’

Ofcom also Tweeted to demonstrate why this theory was stupid, too.

There is no scientific evidence to support the conspiracy theories linking the coronavirus to 5G and putting lives at risk.

With the conspiracy theory spreading quickly, several telecommunications contractors have been subjected to abuse and threats from those who believe the claims laid out by Icke (among others). In addition, people have been burning down mobile phone masts, because, well, they’re idiots.

In a very lacklustre attempt to prevent stupid people taking such action, Twitter announced this week that while it will not remove 5G and coronavirus misinformation, it would remove direct incitement to action, like beating people up who are just trying to do their jobs, or destroying telecomms infrastructure that is more vital than ever during the lockdown.

5. Bot you didn’t know that wasn’t me on the video conference

Sick of endless video calls with your colleagues, clients, and now your family and friends, too because of COVID-19?

I’m not, obviously, because I love everyone and my favourite sort of social interaction involves staring at a computer screen, which I already do five days a week while everyone talks over each other and you can’t see their face properly. It’s the best.

But for those of you who are finding video conferencing a chore, this clever chap has a solution – Zoombot. I can see this totally working, providing you can stay completely silent for an entire call, or convince people that you now talk like a robot. 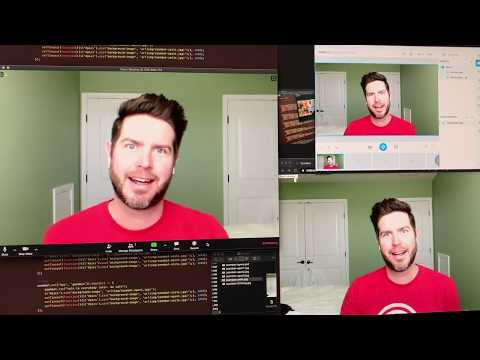