The Office of Communications, or Ofcom, is set to be given new powers to help regulate social media companies in order to protect users from harmful content. The UK communications regulator will be tasked with ensuring that platforms such as Facebook, Instagram, and YouTube are protecting their users from damaging and illegal content quickly and minimising the chances of it appearing. Previously these sites have largely been self-regulated meaning the responsibility of monitoring content has fallen on their own shoulders.

It’s currently unknown what penalties Ofcom will be able to enforce on users who publish such content, however, it’s encouraging to see serious steps being taken to protect social media users.

2. Facebook’s got a new Hobbi

Earlier this week Facebook launched a new app via its New Product Experimentation (NPE) team. Hobbi, which looks very similar to Pinterest, is designed for collecting images of hobbies and interests to then be sorted into boards to track your progress.

According to the description in the App store:

“Hobbi wants to help you document and remember the things you love to do. You can save photos of the projects you’re working on and the activities you love to do, whether it’s cooking, baking, DIY, arts & crafts, fitness or home decor. You can then organize your photos into visual collections in order to see the progress you’re making over time. You might just surprise yourself with how much you have done.”

As explained by TechCrunch, what differentiates Hobbi from Pinterest is the lack of social networking and the fact it gives users the ability to track their progress by grouping photos into projects and collections. Users are able to organise their photos, which will then allow them to create video highlight reels that can be shared with friends outside of the app.

Currently, Hobbi is only available in a handful of countries, but keep your eye out for when it hits an app store near you!

Disclaimer: If you couldn’t tell from the numerous brands trying to jump on the bandwagon today is Valentine’s Day so here are some of the best Valentine’s Day-related campaigns for this year

Starting things off on a high note, Twitter has taken over the London Underground and replaced the ads with various tweets that highlight the real side of Valentine’s Day. By stepping away from the typical fantasy that surrounds Valentine’s Day Twitter’s recent campaign takes a look at the more cringe-worthy reality of dating. The campaign comes to life in Oxford Street, Piccadilly Circus and Tottenham Court Road, plus a number of other underground stations.

This year Pepsi is looking for commitment and wants you to take your relationship to the next step. Starting on 13 February Pepsi launched a novel competition where their customers have the chance to win an engagement ring that features a 1.53 carat, lab-grown alternative diamond made out of real Crystal Pepsi (because apparently that’s a thing).

Pepsi has called for its fans to share their proposal ideas, the more creative the better, in an attempt to win the one of a kind ring. The content will run until 6 March, so there is still time to get your entry in. Be sure to use @Pepsi, #PepsiProposal, and #Contest when sharing your proposal ideas.

Propose how you’d propose for a chance to do it with The Pepsi Engagement Ring – the only ring made with real Crystal Pepsi. Really.@Pepsi with #PepsiProposal #contest for a chance to win.
Rules: https://t.co/xRlxcIrYyI pic.twitter.com/OJ5LKyxrre

5. Show the animals some love

Everyone’s so wrapped up in Valentine’s Day that no one thinks to show our furry friends some love this time of year. This year Ad Council has teamed up with the Humane Society of the United States and Maddie’s Fund to showcase some animals who are in need of a little TLC. The campaign allows passersby to turn matchmaker with a giant dating app featuring pets looking for love at adoption shelters nearby. The Shelter Pet Project allows customers to swipe left or right to find out more about the furry little friends. 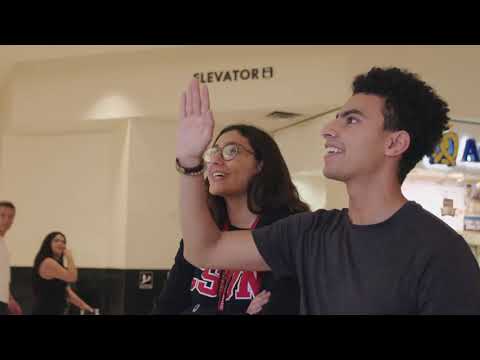