Twitter recently updated its desktop interface, and the general consensus amongst users is that it stinks. The new design, which looks a lot more like the mobile app version of the platform (and suspiciously like Facebook), has been slated for a number of functionality flaws, such as:

One Twitter user, Zusor, hated the change so much that they’ve created an add-on that enables users to revert back to the previous layout, and consequently they’ve been nominated for a knighthood at the Queen’s New Year’s Honours List. Not really, but people are pretty damn chuffed.

How to get rid of redesign: Install this addon i made https://t.co/G429UeSTMi then ctrl+r

The aptly named GoodTwitter extension is available for both Chrome and Firefox browsers. It’s free to install and has already undergone several updates since it’s launch, now boasting an impressive 4.7 star rating.

Apparently 2019 hasn’t reached the Gazeta Polska offices yet, as the Polish newspaper has come under fire for giving away ‘LGBT-free zone’ stickers inside their weekly publications.

By the decision of the District Court in Warsaw, Gazeta Polska is forbidden from distributing the decal until the trial for the protection of personal rights of LGBT activist, Bart Staszewski, has been resolved.

Numerous major companies, such as Bravissimo and Squarespace, have vowed to stop advertising with Gazeta Polska, and, as a result of ongoing homophobia within the country, a Twitter campaign, ‘#JestemLGBT’ (#Iam LGBT) has launched, receiving support from tens of thousands of users, including the European Commission:

Last week, we wrote about Instagram trialling a hidden Like counter, and what this could mean for stakeholders. This week, it was revealed that tech-savvy Generation Z’ers are already finding ways to work around the potential update to get their usual fix of virtual gratification.

Research conducted by data scientist, David Stier, suggests that an increasing number of young users are now converting their personal profiles into business accounts in order to gain access to richer performance data on their posts.

During the study, Stier analysed a number of Instagram sample groups and estimates that there are around 2 million 12-15 year old Instagram users currently displaying phone and/or email information on their accounts.

The thought of children handing over their personal information in the name of popularity (and the fact that Instagram is enabling this) is, in itself, worrying. Another concern is that making contact details so easily accessible could also lead to a rise of brands taking advantage of teens for cheap endorsements online, as was highlighted by The Atlantic last year.

Of course, these teens could be using a dud phone number or email in order to play the system without compromising their safety, however, that could change if their less-cautious friends start receiving freebies from brands…

German Rail has teamed up with Ogilvy Germany and Getty Images for their latest campaign, ‘No Need to Fly – Around the World In Germany’. The campaign is designed to encourage more Germans to ditch their holidays abroad in favour of a staycation by comparing global landmarks with their German look-alikes.

Firstly, an algorithm was used to identify German locations that resembled iconic landmarks all over the world. Next, Facebook data was used to find travel enthusiasts who’s Instagram and/or Facebook accounts demonstrate an interest in specific destinations. These consumers were then targeted with automated video-adverts showing side-by-side images of various international landmarks and their German-based doppelgangers. For extra impact, the campaign videos also displayed real time travel costs to each of the destinations pictured. During the first 13 days of the campaign, 750 unique ads were created. 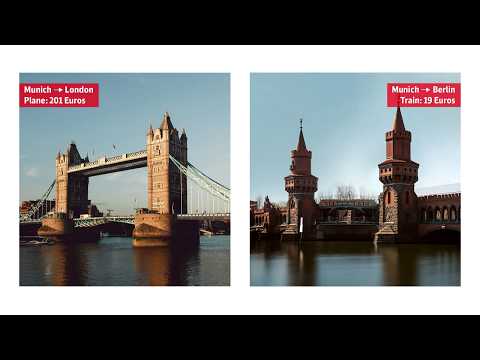 The bloody brilliant campaign is expected to see a 24% revenue hike for German Rail and was shortlisted for the Integrated Digital Marketing category at this year’s D&AD Awards.

5. The youth of today are more #SwitchedOn than people think

Famous street art collective, Graffiti Kings, has created a mural part of a launch campaign for the latest smartphone by Honor, a smartphone brand under the Huawei Technologies group. The artwork, situated off Commercial Road, London, aims to challenge people’s misconceptions about youngster’s smartphone usage; the scenes depicted within the creation change from daytime to nighttime illustrating how Gen Z really use their phones, according to research conducted by Honor.

Whilst older generations might feel that 16-24 year olds are constantly glued to their phones posting selfies, watching cat videos, and just generally wasting brain cells, Honor’s findings suggest that this generation are actually using their devices to fuel creative ambitions and further their careers. Over half of those surveyed (55%) claimed to run a side hustle through their smartphone (ie buying and selling clothes, blogging etc), some supplementing their income through doing so, whilst half of 18-24 year olds have uncovered artistic talents through the use of their smartphone.

You can read more about Honor’s #SwitchedOn campaign and research findings here.