I grew up with Sesame Street. Big Bird taught me the alphabet, Elmo taught me to be inquisitive, and Oscar the Grouch taught me that you can have friends despite being habitually pessimistic. That’s some wholesome TV right there.

At the end of last week, Sesame Workshop filed a lawsuit against new movie, “The Happytime Murders” stating that the film’s marketing campaign appropriates the Sesame Street mark “by way of a violent and sexually-explicit trailer” (you can go watch the NSFW trailer here, if you want).

Despite being directed by Brian Henson, son of the late, great Jim Henson, and produced in part by the Jim Henson Company, the film has absolutely nothing to do with Sesame Street, but Sesame Workshop claims audiences will be confused into believing otherwise.

Oh my Lord, the happy times murder trailer is something else. I don’t quite know what I’ve just watched. Sage to say I’ll never look at muppets/sesame street the same way

Lawsuit aside, I can’t wait to never ever watch “The Happy Time Murders”… but a controversial legal battle ain’t half good exposure, though:

2. The suits are gunning for Tony

Coco the Monkey, Honey Monster, and Snap, Crackle & Pop are set to be jobless if the health and social care select committee get their way.

“Extend regulations governing use of child-friendly cartoon characters (either brand generated characters or licensed TV and film characters) beyond advertising to include HFSS product packaging and in-store promotions.” – Childhood Obesity: Time for action

They’re convinced that the characters who have been associated with HFSS (high fat, sugar, and salt) foods since the 50s and 60s are making our kids fat today. So they want them gone. They also want a 9pm watershed for junk food advertising on telly, a ban on price promotions for junk food, a clear out of the sweeties from the end of supermarket aisles, and to make it easier for councils to stop junk food shops and ads popping up near schools. Advertising is coming under fire!

3. Gregg on your face

Some very clever marketing form Greggs at London’s Foodie Festival where they temporarily re-branded as “Gregory and Gregory” to launch their new healthy foods range. 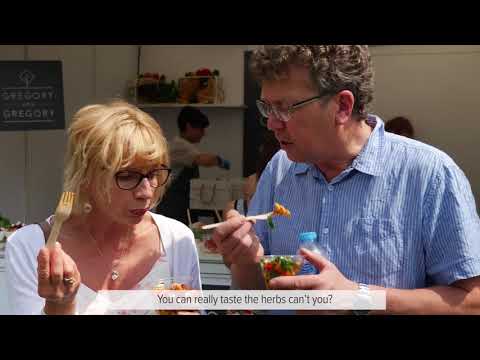 Michelin-star chefs, Masterchef winners, and proud owners of distinguished palates were all fooled into thinking they were sampling artisan cuisine as they tucked into lemon and herb chicken and roast vegetable grain, honey roast ham and free range egg salad, and the vegan Mexican bean wrap. But they weren’t. They were eating Greggs. And loving it.

Poundland vs ThamesLink might seem like an unlikely battle, but after the ThamesLink social media team responded to a passenger complaining about their cancelled services, they responded with the (now deleted) tweet:

Why, Ambassador @TLRailUK , with this fine service you are really spoiling us. pic.twitter.com/RZP9E0yF7k

Social media has gone bonkers for Balenciaga’s 2018 Fall Collection… for all the wrong reasons. I mean, they aren’t known for their dialled-back, paired-down ensembles, but the “double shirt” is next level weird: