Snap Inc’s CEO, Evan Spiegel announced in a new video that “the new Snapchat separates the social from the media.” Literally. In the newly redesigned app, users will find their friends’ content on the left, and content from the community on the right. 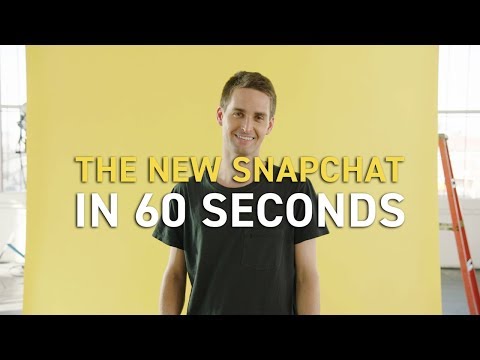 Yes, on the left, the Best Friend algorithm has had a shot in the arm: the new dynamic Friends page is apparently a more sophisticated version, and will learn which of your pals you talk to most, ordering that list accordingly. So say farewell to endless scrolling.

Similarly, on the right hand side, the Discover page holds content from publishers and creators. Those that users subscribe to will be near the top, with other related content to follow. This list, again, will be tailored over time to suit preferences. But interestingly, there seems to be a nod to the Fake News war we’re seeing across social media:

“While the Stories on Discover are personalized algorithmically, our curators review and approve everything that gets promoted on the page. We believe that this balance of human review and machine personalization provides the best content experience on mobile.”

Be good if it works.

2. Google You Owe Us

A new class action against Google could see over five million iPhone users compensated for data harvesting between June 2011 and February 2012.

“In all my years speaking up for consumers, I’ve rarely seen such as massive abuse of trust where so many people have no way to seek redress on their own.” – via The Guardian

Advised by City law firm, Mischon de Reya, Lloyd is attempting to represent the five million who were affected, claiming that Google should be held accountable for a breach of their data rights. A Google spokesperson confirmed that they will contest the accusations, stating that they have “defended similar cases before” and won. We’ll have to wait until next year to find out.

In the same week that Kellogg’s pledged to reduce sugar in its most popular cereals, and quit running child-targeting promotions on Frosties, I was surprised to read about the release of its promotional Super Mario Cereal, a mixed-berry-flavoured, coloured-marshmallow-extravaganza, the boxes for which are also Amiibos… America, you so crazy.

Partnering with Nintendo, Kellogg’s is releasing this limited edition breakfast treat from 11th December across the pond, but I couldn’t find any word about whether this sugary, techy breakfast will be available in the UK – and Walmart won’t ship overseas.

4. He sees you when you’re sleeping…

Move over Elf on the Shelf, the Elf Surveillance Dummy Security Camera (or ‘Santa Cam’ depending on the creator) is the modern parents’ preference for manipulating children into good behaviour.

The product itself isn’t new, but its popularity is. And why wouldn’t it be? With kids seemingly getting hyped up about Christmas earlier and earlier every year, parents need some way of encouraging them into being nice not naughty. For about a fiver, the device mimics a security camera (complete with flashing LED) and leads the kiddiewinks to believe Father Christmas can see when they’re misbehaving.

Last year, parents relied on the scout elf – a character created by Carol Aebersold and her daughter Chanda Bell – who magically travelled to and from the North Pole to report back to their master Santa Claus regarding children’s behaviour. Well, magic and whimsey has been pushed aside this year in favour of would-be high-tech snooping. Poignant.

5. Smart Everything this Christmas

It’s set to be a techy Christmas with likes of Alexa, Cortana, Siri and Google Assitant all desperate for an invite to your family gathering. Artificial Intelligence and Bots are likely to be huge(r) in 2018, and with this, more and more smart devices are cropping up on the market. Here are my current (and arguably useless) faves:

Jim Beam’s Smart Decanter
This is a device that will pour you a Jim Beam on command (because serving your own bourbon is flippin’ hard work)… but only for 6 months, after which, it’ll become a regular old decanter.

Unfortunately, JIM already sold out, but if you still want one, you’re encouraged to check back for its next run.

SMALT, the smart salt dispenser
Currently in the prototype and testing stage, is Smart Salt. Yep. Smart. Salt… Set the mood at your dinner party by playing your favourite jams coupled with psychedelic lighting and a trackable flavour-enhancer – nothing says “party” like monitoring your salt intake!

i.Con Smart Condom
Bringing a whole new meaning to the phrase clever Dick (amirite?!) is this piece of intimate wearable tech. It’s a ring that sits at the base of a condom to track your, um, results, and record how many calories you’re burning when you’re hopping on the good foot to do the bad thing. Plus, you get to upload your data to share with your family and friends, and other users all over the world.

What a time to be alive.