Bit of a battle for the top spot when people searched for “dementia tax” on Monday: 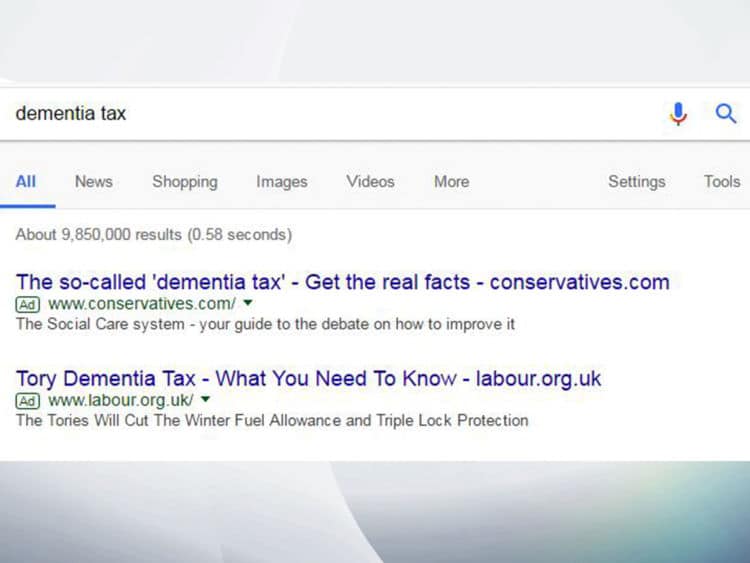 The Conservatives created a landing page to combat the negative perceptions around the “social care shake up” included in their manifesto, and Labour retaliated.

I’ll not be ranting about the GE in this week’s My Five, but I thought it was interesting to see the Tories embrace such a negative term rather than trying to quash its use. By doing so, they’ve shown an acceptance, or at least an understanding, of the terminology people are using when they’re talking about their policies, and they’ve done what they need to do in order to try and use it to their advantage – and that’s good marketing… so… I guess… job well done?

I wonder what their budget was, and how much of it was spent on wasted clicks?

2. “Look for the helpers. You will always find people who are helping.”

The devastating attack in Manchester this week stirred a lot of negativity, but, through social media, the kindness and love of those desperate to help has offered a glimmer of positivity. Paula Robinson guided around 50 teens from MEN to a nearby hotel and shared her mobile number on Facebook to reunite them with their parents, Aj Singh was all over Twitter after he stuck a “FREE TAXI IF NEEDED” sign on his cab while he and his fellow cabbies drove people to hospital, and Chris Gorse, whose offer of a fleet of cars and drivers was shared on Facebook so many times that he was inundated with volunteers: 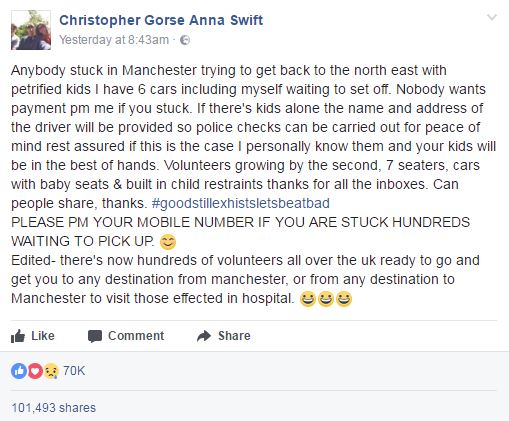 It’s important to be reminded that there is goodness in the world too.

3. It creeps and leaps and glides and slides across the floor

We’re Google Chat lovers at the Browser Media office, and a couple of us are up in arms at the news of Google’s “full redesign of the Android emoji font”, meaning our beloved blob is outta here to be replaced with the round, yellow faces.

The move is apparently down to unifying their appearance across the different types of emoji, so that it’s quicker and easier for us to find the right one – ux ftw! And, joy of joys, multiple illustrators will be able to create new emoji that are consistent with the unified design – more emoji!

Speaking of which, there are 69 new emoji due with the Android 8.0 update expected in the latter half of 2017. So you can cope with the blobs’ retirement with a dinosaur, a rock climber, a pretzel, or a happy breastfeeding woman.

To coincide with its annual Google Marketing Next event this week, Google announced that last-click attribution is no more, introducing Google Attribution as their solution to tracking marketing efforts across multiple channels and devices.

Using data available in Google Analytics, AdWords, and DoubleClick Search, marketers have a complete view of their campaigns’ performance. They can measure impact across all touchpoints including display, video views, search, social media interaction, site visits and app use, instead of using last-click attribution, which ignores these steps.

Currently in beta, Google Attribution will roll out over the coming months and will be available at no extra cost.

Bit of a My Five favourite this one, but in case you missed the post this time last year, I’m pleased to report that 25th May is reserved for celebrating the life and works of Douglas Adams, author of The Hitchhiker’s Guide To The Galaxy.

For those unfamiliar with the book, or indeed the relevance of a towel, there is a passage in the book that makes it abundantly clear, otherwise please refer to this handy infographic: 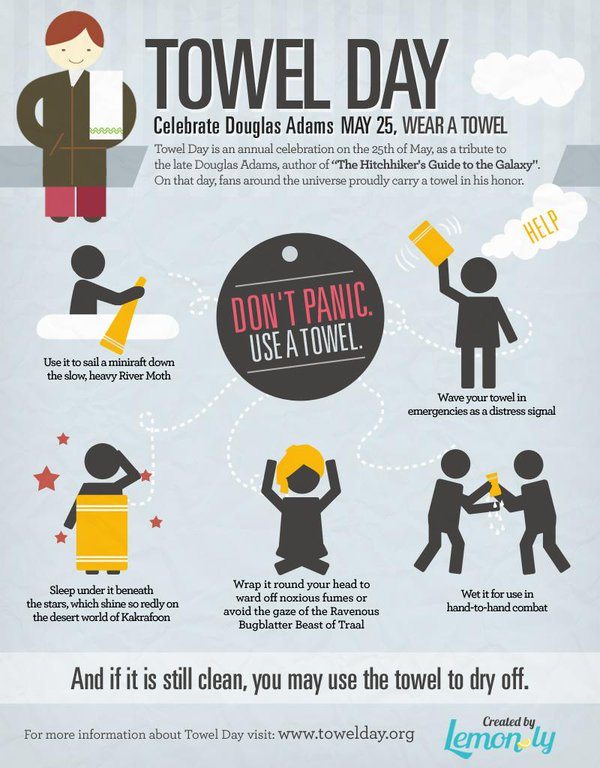 As you’d expect, people took to social media to celebrate #TowelDay, and you can find a list of Towel-Day-Related events over on the highly official towelday.org so you’re fully prepared for next year.