As the first My Five of December I thought we’d kick off with a Christmas-themed post. And so…

Even if you don’t have children you’ve probably heard of Elf on the Shelf by now. Parents everywhere who thought that it would be a cute thing to do for their kids each year, now have to come up with 24 wild antics every advent for the little elf to get up each night and then create a scene for their children to find when they wake up in the morning.

While some find it a charming way to keep the magic of Christmas going for their children, others find it hard work, weird and downright creepy. I can’t blame them.

Whichever camp you fall into and whether you’re taking part in Elf on the Shelf regardless, here’s some insight into ideas from the good to the extreme.

The Bank of England this week angered vegetarians and vegans when a tweet confirmed that tallow, a substance made from animal fat that is often used in the making of soap and candles, is also used in the production of the new five pound notes.

Whilst this might not seem like a big deal to a lot of people, over 1,700 people have signed a petition to get the BoE to stop using the offending substance in the currency’s production.

Google has announced that it’s retiring its Content Keywords feature from Search Console. Back in the day this tool gave an insight into what the Google bots found when they crawled your site. However since the good old days, Google has added the ‘fetch and render’ tool to Search Console, which gives a much clearer idea of what the Google bots find, presented as an actual visual representation. This is much more useful for site owners – hence the decision to ditch the Content Keyword tool.

However, don’t be fooled into thinking that keywords aren’t important… Everyone knows that Content is King.

Social media challenges are nothing new. Since Planking back in 2011 (!) we’ve had the Harlem Shake (2013), the charitable Ice Bucket challenge (2014) and lately the Mannequin challenge, with many others along the way. Well this week a new ‘challenge’ has arisen; the ridiculous One Finger Challenge.

Inspired by anime, this is being called the most risque challenge yet. Whatever next?!

To restore your faith in millennials, the BBC has reported that more young people are watching their Planet Earth II wildlife series than the X Factor.

The first three episodes have brought in more viewers aged between 16 and 34 than the ITV’s singing competition and it’s thought to be due to the ‘proximity of the animals and the scale of the landscape seen in ultra-high definition’.

“I’m told that we are attracting a larger than normal number of younger viewers and apparently the music of Hans Zimmer in particular is striking a chord,” Sir David Attenborough, 90, told the Radio Times. “That pleases me enormously.”

No doubt the stunning imagery and a beautiful/intense soundtrack are key to the new series’ success, but it’s also the nail biting moments like racer snakes chasing newborn iguanas that have gotten everyone talking, and rightly so.

That iguana telling his story of how he escaped 100 snakes seconds after being born. #planetearth2 pic.twitter.com/LzbtlKLMRm

Snakes, locusts, serial killer birds and now bats. Thank you in advance, #planetearth2, for my lack of sleep tonight.

Omg that iguanas vs snakes scene could have been straight out of a horror or action movie and should get all the awards ??? #planetearth2

Need convincing? See for yourself: 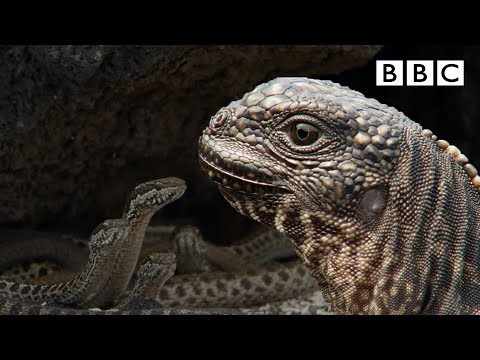