Love Christmas? Have a mild admiration for Google? Check this out. The web behemoth we all know and love has launched Santa Tracker; a way for children (and big children) to track Santa on his travels around the world as he delivers presents on his sleigh.

The specially developed Google Maps algorithm will kick in on Christmas Eve. Until then the Santa’s Village page should have plenty to keep you (and your children) entertained.

If you hadn’t already heard, Instagram upset millions of users this week by announcing a change in its privacy policy, which come January 2013 will allow the photo-sharing site to sell its users’ images to third-party advertisers.

Harsh or inevitable? Either way they’re due to lose a few users as a result… at least after everyone has finished posting filtered images of their Christmas dinner. Zzz.

More about that here.

Christmas music is great for about an hour, until you realise how bad most of the songs actually are (with the obvious exception of Chris Rea’s Driving Home For Christmas – big up that man)

Next time you need a bit of a festive boost, but want to avoid the likes of Cliff Richard, the Pogues and Mariah Carey, stick something on you can actually enjoy, such as the the DJ Yoda Christmas Special – five minutes of festive win.

Elf Yourself was great two years ago. But that was then and now is now, and now it’s just a bit annoying. However, being a lover of all things Christmas I took it upon myself to download the iPhone app earlier this week and I must admit, despite the fact it’s old news, it has kept me amused for hours. Download it and see for yourself – I challenge you not to smile.

For those of you that haven’t played Fruit Ninja; it’s a game for mobiles, tablets and some consoles in which players have to slice up various pieces of fruit as they’re hurled across the screen at high speeds. It’s highly addictive and lots of fun. Video of gameplay here.

While the game is fun, I can’t help but feel that the real thing would be better.

I think this video confirms that theory. 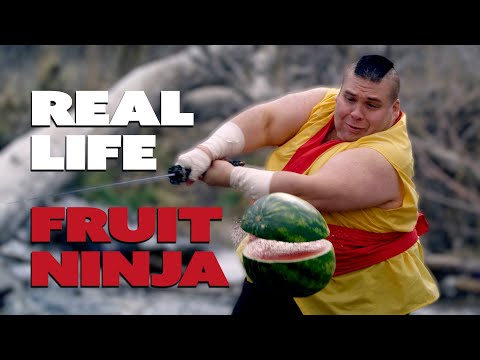 Have a great Christmas and see you all in 2013!