With video becoming the dominant marketing medium in the digital space, it’s no surprise that video production agencies are in demand.

Traditionally, it’s been the job of production companies to interpret the creative brief of ad agencies, but in this constantly evolving landscape, the role of the video agency is changing into one that incorporates all of the planning phase, from marketing strategy through to creative.

As more production agencies become all-purpose video marketing agencies, with the ability to see a campaign through from concept to creation and beyond, the involvement of the client in the commissioning process has also changed.

In this guide for Browser Media, I want to look at how a client might commission a promotional film with a video production agency, from establishing a content strategy through to production, post production and beyond to actual market activation and campaign measurement.

The planning phase can be broken into two distinct areas.

Let’s look at each in turn.

How involved this stage of the planning phase will depend on how far and to what extent you have developed your own content strategy. It is the job of a video marketing company to understand how and where your new promotional film sits in this wider strategy and for this they may want to do an audit of your existing content and profile your audience. It’s very likely they will want to understand your corporate goals.

Your video content agency will want to develop a promo film that fits with your existing brand identity and personality. How this has developed and how strong it is, will depend largely on the content audit and other market analysis.

It’s the creative process where attentions will first turn to what the end product will look like. The creative process can work differently for different projects and companies. You may have a clear idea of what you want, in which case it’s the role of the video content agency to refine it so it sits perfectly in your existing strategy. Alternatively you may only know what you want to achieve with your promotional film, with little vision of what the end product will look like.

Regardless of the client’s input, the creative process will end with a signed off brief, which will include a script and a storyboard (sometimes referred to as a ‘scamp’) .

Next comes the logistics and this is where the client takes more of a back seat.

This is largely an exercise in logistics and time management.

Running a film shoot can be fairly straightforward or very complex project with multiple locations, resources and a lot of individuals involved, not to mention keeping the client in the loop. The job of managing the project will largely fall to the role of the production manager, who is responsible for sourcing, coordinating and transporting everything involved in the shoot, from actors and interviewees to props, sets and equipment.

Some of the challenges the production manager will have to contend with are:

Once the agency has everything in place, then the next step is to actually shoot the footage. This is the production phase and it’s where the real magic happens.

The production phase is overseen by the director who has ultimate artistic control and is responsible for interpreting the brief and storyboard and capturing enough footage that it can come to life on the cutting room floor (more on that in a bit).

Depending on the size and scope of the shoot, there may also be an art director who will be responsible for signing off on all sets and props, pre shoot, and making sure that the look and feel of the production is in keeping with the artistic style and vision of the brief.

Depending on the scale and ambition of your promotional film, there will be a lot of people involved at this stage, from lighting and sound technicians to makeup artists, camera operators and caterers.

There is little to no involvement from the client at this stage. Although they may want to be on set to see how the shoot unfolds, it is very important that the director is the one in charge at this point. If your staff are involved in the shoot (for on location filming or interviews) then it’s the director that is the one responsible for coaching them and signing off on the take when he/she is happy.

Once the director is happy there is enough footage shot then they will call it a wrap and then the post production phase can begin.

There are several stages to the post production phase but it all begins with the editor. Along with the director, the editor is pivotal in realising and translating the brief into the final product and one of the most important individuals involved in a production.

Working their way through what can be several hours’ worth of footage, the editor will select and stitch together the very best into a promotional film that is often no longer that three or four minutes.

There are many stages to the editing process, which deserve an article all to itself. From a client perspective the involvement in this stage will be through the producer. Many video production companies will combine the role of the producer and editor though, allowing for a more streamlined signoff process. This allows a client to communicate their feelings directly to the editor, who can take on board their thoughts.

It’s important to realise that whilst it’s normal for a client to suggest aesthetic tweaks, it’s impossible at this stage to deviate from the storyboard itself. Once the footage is shot, then that’s what the editor has to work with.

There are several other stages to post production, including:

The length of the post production stage can vary and will depend on the level of client involvement and the complexity and length of the overall production. Once the final edit has been signed off though there’s still plenty of work to do in terms of getting your promotional video noticed.

There are several considerations to bear in mind when thinking about how your promotional video will get the maximum exposure to the most relevant audiences.

This is the video activation stage and it’s tied in directly with your original marketing strategy. As the infographic below demonstrates, there are a lot of considerations to make when it comes to the actual distribution and promotion of your film. 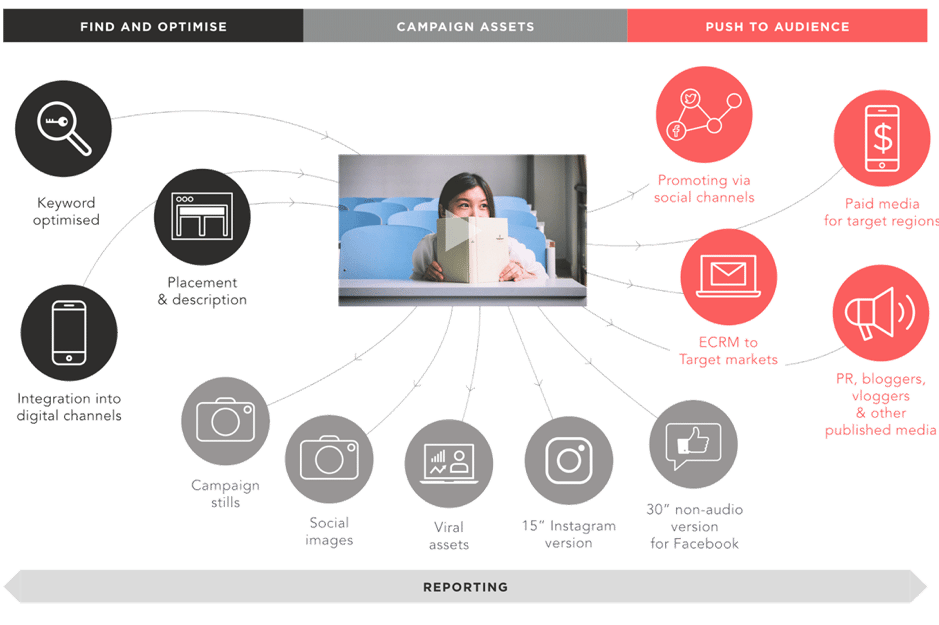 Part of any solid activation strategy is proper measurement. This isn’t as easy as just keeping an eye on your web traffic with Google analytics. There are many ways of measuring the success of a promotional film and what you measure will largely come down to what you want to achieve.

The degree of involvement in this stage will depend on the nature of your video content agency. If they have been instrumental in putting together your strategy, then it goes without saying that they should be involved in activating that content.

About the Author: Evelyn Timson is the Managing Director of UK video content agency, Aspect Film & Video. She has years of experience working with some of the world’s most recognisable brands like UNICEF, Nationwide, North Face, TaylorMade adidas, Slimming World and Farrow & Ball. You can connect with Aspect on Facebook or Twitter or see a selection of their award winning work on their YouTube Channel.