On average they found that 89% of the traffic generated by search ads was not replaced by clicks on the organic listing when paid search ads were paused, and this was consistently high across all verticals tested. They ran in excess of 400 studies in total, on paused paid search accounts to come to this conclusion.

Earlier this week Google released some new findings in which they tested the correlation between organic search results and their impact on ad impressions and clicks, using a sample of 390 “Search Ads Pause” studies.

From the study they concluded that 81% of ad impressions and 66% of clicks occur without an organic listing of the same domain appearing on the first page of the search engine results pages.

They also found that half of the clicks on ads for advertisers that appeared in the top position in the organic search results were not replaced by organic clicks if their ads were paused. 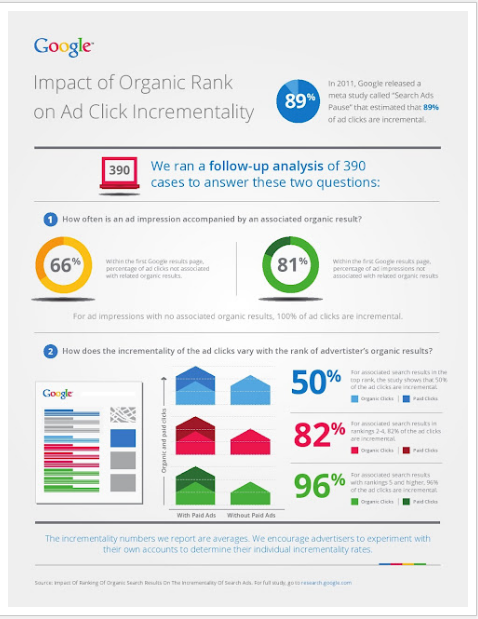 Some people often think that it is a sensible idea to pause keywords within a paid search campaign if the advertiser ranks on the first page of the organic results for that term. However this research shows that that isn’t the case.

Whilst choosing to pause paid search ads for keywords that you rank on the first page of the organic search results for will save you money on click costs, it could lose you up to 96% of your traffic.

Google does clearly state that these figures are averages and encourages advertisers to carry out their own research to see if these values are similar for them, as results are going to differ from advertiser to advertiser, and keyword to keyword.