With our Fantasy Football league and recently acquired office toy, readers of our blog might be forgiven to think that we like like our football. Well, that’s certainly the case for a few of us – so it’s great to see when a bit of tech, online marketing and the beautiful game collide.

Earlier this month saw the first North London derby of the current season played at White Hart Lane between Tottenham Hotspur and Arsenal. Beyond me getting the office bragging rights until February next year, the match was also the chance for Aurasma, Premier League sponsor of Tottenham Hotspur, to showcase their impressive mobile technology to fans attending the match.

Aurasma is an augmented reality (AR) ‘visual browser’ platform that offers realtime multimedia content, such as videos and animations (known as “Auras”) by pointing your smartphone or tablet camera towards a trigger object like a magazine cover, a pasta jar or even a football shirt.

For instance; a lot of us have had to endure the unenviable task of putting together some Scandinavian flat-pack furniture. However, with Aurasma you can access a free assembly instruction video for your new cupboard by simply pointing your phone at the packaging – brilliant!

We’ve been playing around with the app in the office and all agree it’s a lot of fun, but who is really going to use it beyond a few technophiles and Spurs supporters?

There have been a number of attempts in recent years to make the real physical world interact with the internet  through AR that haven’t quite appealed to the maintstream, so what could make the Aurasma platform more successful?

According to Matt Warman, Consumer Technology Editor for the Daily Telegraph, Aurasma appears to have taken the concept further than its predecessors by “recognising an image from a camera in the same way as search engines recognise words.”

With this in mind, brands using Aurasma technology can now engage with potential customers with AR by offering informative and entertaining content. This can be followed by linking through to the company website or offering a call to action. So will these revelations bring targeted traffic to mobile websites and lead to valuable conversions –  only time will tell.

So we’d like to know what you think, has Aurasma hit the jackpot with its visual browser or is this another novelty app that will soon be forgotten?

Check out the video below to see Aurasma in action; 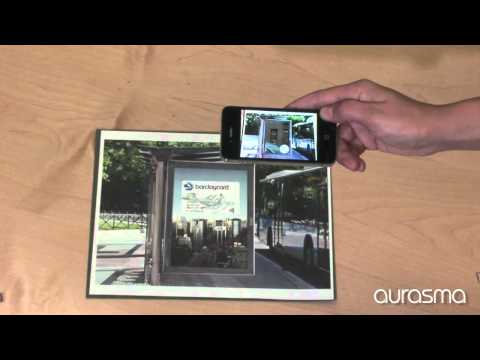