Skip to content
You are reading: Top 5 Viral Advertising Campaigns (and why they work)
9th September 201326th May 2022
Video, Viral, YouTube

Viral videos are not just about cute cats..

They are actually a very valuable communication channel, enabling brands to tap into base emotions in order to captivate, motivate, and encourage word of mouth.

I’ve picked 5 of my favourite viral ad campaigns across different sectors which have not only done just that, but have brought something new to the forum, and in return have earned themselves and the brands they represent new respect from the online community.

Cue the drumroll, here are the top 5 presented in reverse order:

We love a good Vine here at Browser, and this advert-in-progress is taking the filmmaking app to a whole new level, inviting people to help make the world’s first film shot entirely on Vine.

Over three days in August, Airbnb tweeted ‘shot instructions’ via @airbnb, prompting participants to share back on Twitter via #AirbnbHV. The best contributions are being edited into a longer film about travel and adventure, with worldwide release on 13th September on http://hollywoodandvines.com.

Although this hasn’t actually been completed yet I’ve chosen this because it’s a really creative idea which has utilised a popular social medium and taken it to the next level. It’ll be interesting to see how well this one fares in the viral marketing arena.

4. TNT – ‘A Dramatic Surprise on a Quiet Square’

The result? A rather quirky viral video which, in the end it turns out, was been made to launch the TNT Netherlands channel, back in April 2012:

This is cool for two reasons – it perfectly encapsulates the channel’s strapline ‘We Know Drama’, and it takes the button-pusher on an emotional roller coaster of suspense and thrills, which the viewer then shares in. Combined with the little bit of novelty of a TV channel promoting themselves via the internet, this tongue-in-cheek creative has earned itself over 46 million views. The sequel is arguably even better, too.

This short web film is a brilliant example of taking a fresh approach to communications. Everyone has experienced door-to-door and street canvassers, and TV ads which pull at the heart strings in order to get donations. So much so that Joe Bloggs now tends to cross the street, or change the channel, leaving a good cause to plead for help in vain.

However, ‘Follow the Frog’ takes a slightly different approach, encouraging those of us who want to do something to help the world but have the apathetic ‘it’s just one person’ vibe. This video shows how with small everyday actions you can have real impact: 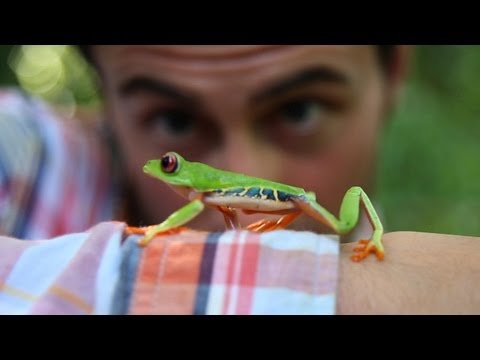 The blog post also sums up nicely why it works.

Dove’s campaign for real beauty started in 2004, after market research found that only 4% of women consider themselves ‘beautiful’.

This viral video, ‘camera shy’, which has clocked up over 17 million views since it was uploaded to Dove’s YouTube channel two months ago, is the latest in the campaign which aims to “create a world where beauty is a source of confidence and not anxiety”:

A nice video which manages to lightheartedly prompt women to think when it was that they started hiding from the camera, when they used to love the camera as a little girl.

Hooking nicely into the larger campaign narrative, Dove neatly encourages participation and discussion around the campaign with this ad, continuing to tackle the female beauty issue with tact and effectiveness.

1. Dermablend – ‘Go Beyond the Cover’

This ad from 2011 is still one of my favourite to date. L’Oreal-owned cosmetic brand Dermablend Pro wanted to demonstrate just how well its makeup can conceal anything, and came up with the stunningly simple idea of hiring Rick Genest, one of the world’s most recognisable full-body canvas’ to demonstrate the product’s effectiveness.

Whilst Genest has grown his profile by landing roles in several high profile media creatives as ‘zombie boy’ – namely Lady Gaga’s ‘Born This Way’ music video and a campaign for fashion brand Mugler, the majority of people probably won’t have a clue who he is. Showing him first off with perfectly unmarked skin and running the video backwards to reveal the true extent of his tattoos evokes strong reactions, whether it be amazement, disgust and/or shock – in respect to both the extent of the inkwork and the product’s effectiveness..

Combined with a kick-ass backing track it’s easy to see why this advert has had over 19 million campaign views, 13.5 million views on YouTube, has been tweeted about over 15,000 times (and trended worldwide for a week) AND been shared on Facebook over 1 million times. Not bad for one of the smallest of L’Oreal’s 23 brands and a limited budget.

If you want to watch the making of the video, you can see it here.

One of the world’s biggest commercial entities they may be, but this video will leave you with a smile on your face and a new faith in the kindness of humanity:

If it doesn’t, then quite possibly you’re dead inside.