This week, US Speaker of the House, Nancy Pelosi, branded Donald Trump a ‘freak’, whose excessive and aggressive activity on Twitter has ‘cheapened the presidency’.

In the same interview with Recode Decode’s Kara Swisher, Pelosi also claimed that by using his office “as an attack vehicle”, the President is diverting the focus of the press onto his own cause and away from more important national issues such as healthcare, prescription drug prices, infrastructure, and government transparency – aka the things that should be taking centre stage.

Just like the White House, a poorly managed social media strategy can have a damaging effect on a brand’s image, and the way the world views an organisation and its values.

Here’s a look at some epic social media fails that have caused the brands involved to suffer public humiliation (albeit short-lived), and the lessons we as social media marketers can learn from their mistakes.

In 2016, The Oscars faced a backlash after announcing an all white nomination line-up for the second year in a row, despite a host of awesome performances from black actors and directors that year.

So when Total Beauty posted a tweet showing admiration for Oprah Winfrey at the awards, it seemed like a powerful way for the brand to show support for women of colour in Hollywood.

Total Beauty was quick to remove the tweet and apologise but, as expected, the sharper Twitter users had already seized the moment to name and shame the cosmetics company for their ignorance:

Takeaway: Showing genuine support for sociological causes such as equality or protecting the environment can be an effective way to demonstrate CSR and the values held by your brand. But getting your facts wrong can actually end up fuelling the exact cause you’re working against.

National ‘days’ and celebrations were made for social media, and are a great way for brands to pad out their marketing calendar and maintain activity in between strategic social campaigns.

As well as an opportunity for brands to showcase their sense of humour or personality, national ‘days’ can be the perfect excuse to interact with your audience, for example through running a competition or by starting an online discussion.

Last summer, the ‘YouTube Creators’ did just that, and posted this patriotic tweet to mark Independence Day… 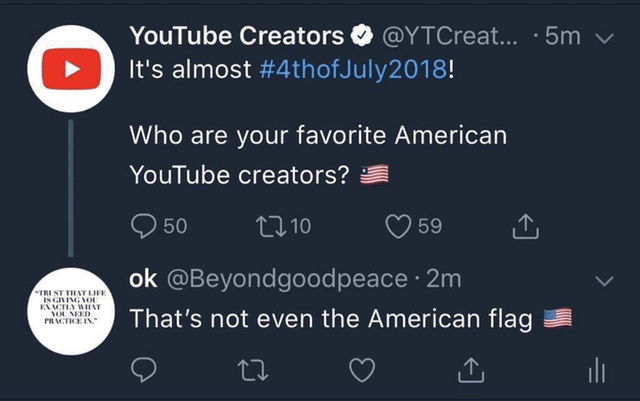 While no one appeared to be offended by the faux pas, for a change, people weren’t about to let it go unnoticed either.

Takeaway: Just as you should always proofread your content, always double-check for typos, misspellings and that you’ve got your facts straight before posting anything on social.

Okay, so this fudge up didn’t actually take place on social media, but it certainly demonstrates how social media can be used to escalate a company’s misdoing to a wider audience.

We all remember the tragic events of the 2013 Boston Marathon, during which three people lost their lives and a further 260 were injured as the result of a double bombing at the finish line. All of us that is, except for Adidas.

In 2017, the sports giant sent the following marketing emails to participants who had completed the run, congratulating them on their amazing achievement but with an unfortunate subject line:

Naturally, Adidas’ unfortunate choice of words went viral on Twitter. And whilst a lot of users couldn’t believe a brand of such scale could make such a cock up…

You just can’t make a mistake like this, @adidas. Even the smartest brands trip up every once in a while, but … https://t.co/Yd4awYvwIf

…  some skeptical users couldn’t believe a brand of such scale could make such a cock up!

I dont understand how this could have slipped trough so many security measures aka corporate eyes – unless it was fully intenional.

Adidas did issue an apology for the oversight. Spokeswoman, Maria Culp said: “We are incredibly sorry. Clearly, there was no thought given to the insensitive email subject line we sent Tuesday. We deeply apologize for our mistake. The Boston Marathon is one of the most inspirational sporting events in the world. Every year we’re reminded of the hope and resiliency of the running community at this event.”

Whether Adidas did genuinely slip up, or whether this was a case of ‘any publicity is good publicity’, this kind of schoolboy oversight can seriously harm your brand image.

Takeaway: Do your research! Sporting events can be a great opportunity for marketers to raise brand awareness or reach out to a specific audience, but always be respectful and make sure you do plenty of research into the history of the event you’re capitalising on so as not to cause offence.

Cast your mind back to the auditory illusion clip that went viral last year, fracturing the internet and dividing mankind into two very adamant tribes: “yanny” and “laurel”.

(If you haven’t got a clue what I’m talking about, check out the recording here, and come back when you’ve decided which side of the fence you’re on.)

I actually hear “yearly”, but more interestingly, what the US Air Force heard was the perfect opportunity to promote their victory over IEA extremists after days of airborne combat in Farah, Afghanistan:

After discussions at the Pentagon, the air force did remove the tweet, recognising that their bizarre attempt at humour was in “poor taste” and was being internally addressed.

Snapchat: Would You Rather?

Last year, Snapchat found themselves in an expensive hole when an advert for the game app ‘Would you Rather?!’ by developer, Daniel Lulic, asked users whether they’d rather “slap Rihanna” or “punch Chris Brown”. 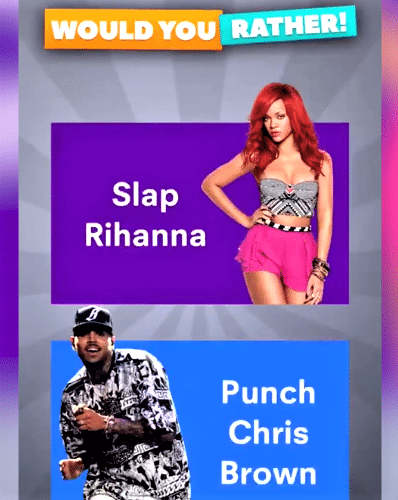 This was a sick reference back to 2009 when Chris Brown was imprisoned for severely beating up then girlfriend, Rihanna.

Understandably outraged, Rihanna turned to Instagram to shame Snapchat (ironically one of the platform’s biggest rivals), stating they had “made a joke” out of domestic violence (DV) and let down “all the women, children and men that have been victims of DV in the past and especially the ones who haven’t made it out yet”.

On issuing an apology, Snapchat appeared to try and shirk some of the responsibility, claiming that the advert was the brainchild of a third party developer, and not their own doing.

A spokesperson for Snapchat told The New York Times: “This advertisement is disgusting and should never have appeared on our service. We are so sorry we made the terrible mistake of allowing it through our review process. We are investigating how that happened so that we can make sure it never happens again.”

The ghastly advert and responsible developer were swiftly removed and blocked from the platform, however, Rihanna’s comments caused the share price value of Snapchat’s parent company, Snap, to plummet by almost 4 percent, wiping $800m from its market value.

Takeaway: Passing the buck is a terrible PR crisis strategy; you are ultimately responsible for anything that is broadcast on your website or other social platforms, therefore it is crucial to thoroughly vet and review any third party content you intend to display or share. Sensitive or raw topics should always be strictly off limits to avoid offending audiences, damaging your brand and, as Snapchat discovered, to avoid considerable financial losses.

The company published an ad to Instagram Stories designed to appear as though there were a single hair resting on the user’s phone screen. As the user swipes the screen to remove the stray hair, they are redirected to a landing page on the Kaiwei Ni website where the company was holding a Black Friday Sale on Yeezy products.

There is a fake hair on this ad to get you to swipe up.

Someone needs to stop these “growth hackers.” pic.twitter.com/FpqMdMOP2m

Result = A lot of annoyed users who just wanted to clean their screen and move on with their day, but who now find themselves staring at a bunch of discounted trainers they have no interest in buying.

While it was in some ways a stroke of (evil) marketing genius, the ad violated Instagram’s advertising policies and was subsequently removed, and the offending account disabled from advertising in the future.

Takeaway: People don’t like being made to feel stupid, so underhand tactics will only alienate potential customers and do your brand more harm than good. What’s more, tricking users into visiting a site they’re really not interested in will just result in a lot of unqualified traffic that’s unlikely to convert. When it comes to social media, if you try to game the system, the powers that be will eventually bite back, and probably suspend your account for not playing by the rules; and that’s no use to anyone.

The above horror stories all have one thing in common: the offending post was swiftly removed. Except, it wasn’t really. What we post on social media leaves an indelible mark on the internet and can always make its way back up to the surface. An active social media strategy can be a highly effective way of engaging with your audience and driving targeted traffic to your website; ensuring your posts are well-researched and well-edited will ensure the engagement you generate through your brand’s social media activity is positive.