There’s no denying that Pinterest is a bit, how can I put it, ‘girly’.

But before I offend anyone with my sweeping generalisations (yes, I’m aware that some girls like sheds and weaponry too), I should point out that recent user-statistics also suggest that the site is very much dominated by females.

The most recent statistics I could find suggest a 70/30 split.

With this in mind, I was surprised by a recent Social Media Benchmark study by eDigitalResearch, which showed Topman to be the most followed retail brand on Pinterest.

More surprising is that Topman has more than double the amount of followers than any other retailer, including Topshop, which at the time of the study had a mere 8,500 followers to its name.

While the study doesn’t reveal the demographic of Topman’s followers, a bit of top-level research suggests the majority are male users.

The table is void of many large brands which you might expect to be performing better on Pinterest: large retailers such as Amazon, and supermarkets (with the exception of Ocado) are clear absentees.

However despite the relative lack of Pinterest followers, the tables below show that elsewhere, retailers are performing very differently: 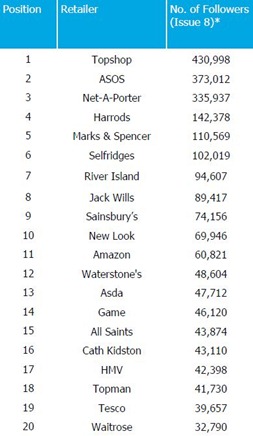 Without pulling too much out of the Facebook and Twitter tables above, it’s evident that different sectors are received very differently in different online environments.

With this in mind, it’s crucial that businesses think hard before diving head first into social media, because as Topman has proved, Pinterest is not just ‘a social network for girls’.