This week’s My Five is by Simon.

Google has just announced an update to January’s Page Layout algorithm, designed to reward sites with content, rather than ads, above the fold.

Less than 1% of English language queries have been affected by the latest roll out. It’s by no means a game-changer, but should act to boost websites with better quality content and a decent user experience, which is a double-thumbs-up in my book.

Social media…sometimes it works, other times it doesn’t, but here are a few examples of brands getting things right, and having a personality at the same time – which is nice in today’s ‘dying on the inside’ society.

First up to the plate is O2 who, to their credit, are pretty ‘street’. Here is an article which details how O2 responded to a customer who had an issue about his router and only seems to speak Twitter in Jamaican patois, and below, a snippet from the conversation. 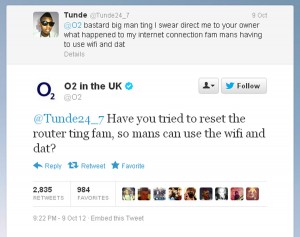 And while the #bants wheel is turning, check out this conversation between a pub and the coffee brand Douwe Egberts, well worth a gander.

I’ve never had much of an urge to smoke cigarettes, although on ‘occasion’, most notably after several jagerbombs, I have been known to ‘socially-dabble’, and the latter, well…tempting and unattainable are two completely different things.

According to a study conducted by researchers at Chicago University’s Booth Business School, an online poll of 250 participants in Germany revealed the yearning to interact through tweets, photos, and comments was stronger than sex and cigarettes.

Wilhelm Hofmann, the study’s lead author, reasoned that because social media is more readily accessible than other stimulants it is  harder to turn down. He also suggested it strikes a high note in terms of desire because in the case of cigarettes and alcohol, social media is also a lot cheaper (especially in these times of austerity #thatchersbritain)

I’m a pretty nice guy. This fact can be backed up by a handful of people, all with clean driving licenses and no prior convictions. However, I am just a man, and like any man I need to vent some anger every now and again.

This week I’m giving ‘crazy eyes’ to Gwitr. Why I hear you ask? Well the simple reason is this: Who in their right mind sends virtual gifts to people they genuinely care about? I mean, what is happening inside your head when you do that? And secondly, who feels special when they receive one?

Forgive me if I’m spoiling your Christmas here, but I think I missed the train when this virtual gift abomination was considered a grand idea.

5. ‘You have to believe Sebastian’

Point 4 was a tad overzealous, granted, but it’s Friday so I need to make sure point 5 is a monster. So here it is…

Sebastian riding on the back of Falcor from the epic movie ‘The Neverending Story’. If you haven’t seen this film (literally life changing) I recommend you pop down to blockbuster this weekend, buy some popcorn, a 1ltr bottle of cherryade and treat yourself to some filmatic gold. 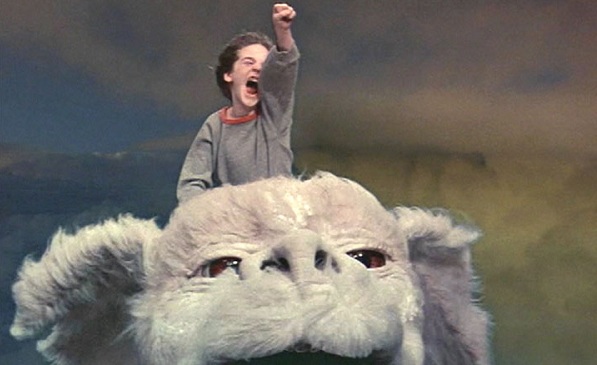 And on the subject of life-changing films, while you’re there why not see if they have ‘Willow’, ‘Legend’, ‘Labyrinth’, ‘Dark Crystal’ or ‘Krull’ in digitally remastered format? Go retro this weekend and be a better person for it.