*GAME OF THRONES SPOILER ALERTS AHEAD*

In this week’s episode of Game of Thrones, eagle-eyed fans were quick to notice that while the rest of the room rejoiced with plenty of ale over their victory the Night King and his cadaver army, Daenerys’ choice of tipple was a Starbucks Latte.

my favorite show in the entire world forgot a STARBUCKS COFFEE CUP ON THE TABLE WHILE FILMING pic.twitter.com/60z3pOCfg9

I was far too amused by Tormund’s drunken ramblings to notice it the first time, but I have since been back and yes, the rogue cup is definitely there. HBO has also addressed the slip up, both on Twitter and in interviews, making light of the situation:

The latte that appeared in the episode was a mistake. #Daenerys had ordered an herbal tea. pic.twitter.com/ypowxGgQRl

The cup in question is actually not from Starbucks at all, but came from a local coffee shop in Northern Ireland, however the coffee giant was quick to steal the thunder, tweeting, “TBH we’re surprised she didn’t order a Dragon Drink”. *tumbleweed*

This story has spread like wildfire across the web, which has been the case for any Game of Thrones related news over the past few weeks, but I always wonder with these things… with an eye-watering budget and two years’ worth of production and editing, how did this get missed?! The cynic deep within me would say it’s a bit of a marketing stunt from HBO in order to get exactly this reaction. If it is a genuine error, then it’s pretty poor.

As far as we know, this is the first major GOT blooper to have come to light, although I imagine the die hard, vitamin D-deficient Westeros fanatics will have already started foraging through the hours of previous footage in search for other juicy slip ups.

The public rivalry between Burger King and McDonald’s has been an ongoing source of entertainment for years, but this latest marketing campaign from Burger King is a corker.

Burger King has teamed up with LOLA MullenLowe, the same creative brains behind its successful ‘Scariest BK’ Halloween campaign, to create a series of anti-clown propaganda ads. Each advert features a real-life birthday party snap of a petrified child and the evil clown who ruined their special day, with the simple tagline: “Birthdays should be happy: Ask our manager about booking a clown-free party”.

As clowns go, these are bloody terrifying. Clearly, this campaign is directed at arch-enemy, McDonald’s, but the fast food giant has tapped into a very real fear for many people, as demonstrated by a recent US poll which showed that our friends across the pond are more afraid of clowns than they are of terrorism.

Marcelo Pascoa, head of global marketing at Burger King, commented on the campaign: “Burger King knows that birthdays are a very big deal for kids and we believe they should be fun and clown-free… we prefer to be on the good side of children’s memories, not the scary ones, like the traumatized kids in these ads.”

An investigation conducted by the BBC has found that, for numerous search terms, paid adverts from independent firms featured higher in Google’s search results than the official or Government bodies offering the same service at a lower price.

For example, when searching for the term ‘driving license application,’ a paid ad for a company charging £49 for changing the address on a current driving licence appeared above the DVLA in the results, who provide this service free of charge.

“We have policies that prevent ads for paid products or services that are available from a government or public source for free or at a lower price, unless they offer a clear added value,” said a Google spokesman.

While I can see the value to Google in rewarding companies that pay for advertising, I’m struggling to see the added value for the consumer on this one.

4. Liquid Death: saving punks from the risk of dehydration

If anything confirms Grayson Perry’s concerns about the descent of man and toxic masculinity in the postmodern world, it’s Liquid Death. The latest start-up from former Netflix creative director, Mike Cessario, aims to provide a brand of drinking water that speaks directly to extreme “straight-edge” punks and badasses.

Cessario, who has a background playing in punk and heavy metal bands, believes there is currently a gap in the market for “straight-edge” punks who are still hard but who choose to demonstrate their extermisim through abstaining from alcohol and drugs, and/or practicing veganism.

As Cessario explains, “there are more vegans at a heavy metal show than a Taylor Swift show” and yet most water brands only appeal to “Whole Food yoga moms”. However, Cessario has come to the rescue with his tallboy cans of H20 goodness, complete with gothic fonts and disintegrating skulls.

Hydration has never been so hardcore.

Considering he mentions vegans so much as a key target market, Cessario’s marketing is pretty violent: 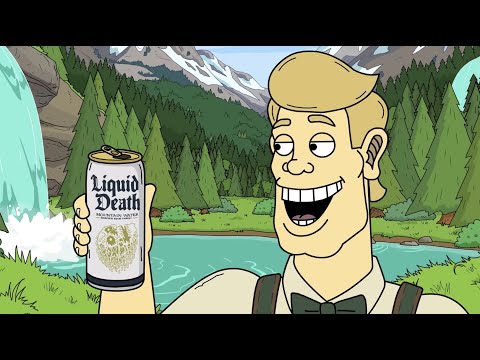 According to Cessario, the product is also aimed at younger audiences, which was the driver behind the tallboy beer can resemblance, as “one thing we know in marketing is if you want younger people to want something you have to market to people in their 20s because teens want the thing they can’t have”.

At least there’s an environmental focus: the water is sustainably sourced, aluminium cans “are far and away the most sustainable beverage container by virtually every measure,”(their words, not mine), and the start-up plan to donate five cents from every can sold to help rid the ocean of evil plastic.

Whilst encouraging healthier beverage choices and the company’s #DeathToPlastic ethos is progressive and applaudable, I can’t help feeling that using destruction and violence to appeal to young people is a bit of a step backwards.

At the moment, Liquid Death is only available to buy online, so if you’d like to wrap a rope of veins around your Thirst’s throat and strangle it, you’ll need to visit their website or Amazon first to get them deliver your sustainable mountain water to you via a diesel-burning courier. Or you could just get over yourself and grab a bottle of water – a reusable one though, of course.

We all know what a pain in the proverbial recruiters on LinkedIn can be. Yes, yes, LinkedIn is a “business networking platform”, but half the time the ‘amazing opportunity’ spiel that lands in your inbox has been churned out to a million other ‘perfect candidates’ with the right keywords in their profile, and/or is of no interest to you at all.

Alejandro Ramirez thought he’d test the waters and see whether a nonsense LinkedIn account would also receive job offers from recruiters. So he created a LinkedIn profile as Sea Bream, the Underwater iOS tech lead.

I was curious to see if a nonsense LinkedIn account would also receive job offers. It does! :D pic.twitter.com/jEx5f0KzKg

And low and behold, he was right.

It wasn’t long before LinkedIn smelled something fishy going on and suspended Sea Bream’s profile, but the experiment certainly went down well with the Twitterverse. You can see the full thread here, just be ready for a lot of fish puns.