1. By court order of the Peaky Blinders…

Producers of the epic BBC crime series, Peaky Blinders, have taken legal action against a Manchester bar for ripping off their brand.

The bar owners insist they are purely fans of the Bafta-winning drama and “do not in any way intend on portraying ourselves as being affiliated with the show”.

I beg to differ…

The Peaky Blinders Bar Manchester is about as subtle as a brick; the walls are plastered in 12 foot wall murals of the Shelby brothers and Aunt Polly, the cocktail menu is named entirely after characters and quotes from the series, and the dodgy lookalikes… the less said about those the better.

The show’s producers claim the bar “has no authorisation” to operate under the brand, and have contacted the owners with a legal notice to cease and desist. However, while the ‘Peaky Blinders’ TV and media trademark is safe, an application to trademark the use in relation to food and beverage services was opposed by the Intellectual Property Office, so the bar owners technically aren’t breaking any laws.

While I’m not sure where this leaves the show’s production companies legally, they have a right to want to protect their brand and are justifiably cheesed off. It’ll be interesting to see how this battle unfolds, and whether the Peaky Blinders bars in Belfast and Liverpool are hauled over the coals too.

Amazon has stopped selling its branded Dash buttons as consumers are showing preference for other buying methods.

For those not in the know, Dash buttons are little, plastic buttons that can be stuck around the house so that, when everyday products run out (such as toothpaste, washing powder, cat food etc) you can reorder more at the push of a button – literally.

Of course, this was a crafty way of scattering Amazon checkout points around the home and a fun gimmick for a bit, however, the novelty has finally worn off thanks to the rise in mobile first tech and voice commerce.

Virtual Dash buttons are still going strong on the Amazon app, and while existing buttons will continue to work, they will no longer be available to buy.

The second series of the Irish comedy show Derry Girls started on Channel 4 this week (woo!) – hilarious, dramatic and wincingly non-PC in places –  what’s not to love?

The show is set in 90s Northern Ireland, so for its accompanying social media campaign the marketing team is channelling a classic piece of 90s television nostalgia  – the wonder of Teletext.

The activity will mainly unfold on the @Channel4 Instagram account and posts will keep fans entertained with updates throughout the series, as well as weather updates, the music charts, and ‘spiritual guidance’ from Sister Michael. 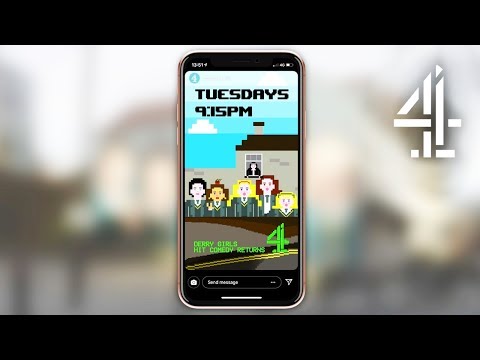 4. Vegan sausage rolls are bringing home the bacon at Greggs

Greggs is on a roll this year (sorry), reporting a sales surge of 9.6% in the seven weeks to 16th February, a windfall the bakery chain is putting down to their controversial vegan sausage roll. The bakery chain’s soaring profit margins have caused shares to almost double in value since July last year.

Greggs’ savvy marketing campaigns are always a source of entertainment – sausage roll phone cases, witty social media responses, and that time they reversed a store sign to sabotage the shop front opposite – but its vegan sausage roll campaign has deservedly been hailed a “PR masterclass” by the industry magazine, PR Week.

I wonder if Piers Morgan will be getting a slice of the pie for his part in drumming up business?

A scaffolding company in Yorkshire has constructed the perfect promo video, receiving over 310,000 views and 7,000 likes in just three days. The video, posted on LinkedIn, features MD, Gary, and Senior Contracts Manager, Brett, trying to explain why LA Scaffolding is the best scaffolding service provider around.

It’s quite clear that this post has some marketing know-how behind it. They’ve ticked several boxes by cleverly working an enticing intro, a link to their new site, a call to action, an entertaining video, and current contact details into the post. So while it’s not the amateur attempt at marketing the cheeky chappies would have people believe, it’s certainly a great way of demonstrating the culture within their business and their endearing personality – I’d probably hire them.

Some will find it staged and a bit cheesy, others will love it for what it is, what do you think… ?