I was born in the 90s, which means I am classed as a millennial. Or depending on where you are in the world, and where you get your news from, I may also be referred to as belonging to generation Y, the Peter Pans, the boomerangs, or even the avocado generation.

Whichever your labelling preference, people like myself were the exact target audience that Chancellor Philip Hammond had in mind when launching a new millennial railcard that entitles 26-30-year-olds a 33% discount on their train fares.

However, despite more than five million Brits being eligible for this scheme, only 10,000 cards were made available to the public. Given this shortage, the cards sold out instantly (causing the website to crash in the process).

This prompted Virgin Trains to react with a tongue-in-cheek offering of solace to those of us that missed out on blagging the discount card, by granting the same great discount in exchange for an avocado.

Didn't bag a Millennial Railcard? Have no fear! Simply present an avocado in place of your railcard when booking your ticket and you'll be entitled to the same fantastic 1/3 off discount for one week only. Full details here: https://t.co/7Dp48RWzgp ? #Avocard #railcard pic.twitter.com/NLhPfbD2yp

But, soon after tweeting this offer, Virgin received an influx of comments from frustrated young people, accusing the company of being patronising and condescending. Virgin insists it is merely a “light-hearted” way of helping people.

As the world’s leading search engine and a digital ad giant, Google is on a mission to fight misleading, cruddy information – be it malware-laden sites, offensive content, get-rich-quick schemes, or fake news – from being spread via ads and monetised content hosted on its platforms.

Charting this progress in its “Bad Ads Report”, Google has confirmed that last year, it removed 3.2 billion bad ads, blacklisted 320,000 publishers, 700,000 mobile apps, and 90,000 sites. But, don’t just take my word for it, head over to the Google blog for an official update.

The evolution of our language really fascinates me. In 2018 so far, more than 1,100 newly coined words, phrases, and senses have been added to the Oxford English Dictionary (OED). The latest update includes shiny new entries such as ‘hazzled’, ‘northern flicker’, and ‘electric catfish’ all finding their way into the dictionary, along with more-established terms such as ‘me time’ and ‘hangry’, and also those words which have seen a recent shift in sense, such as ‘snowflake’.

This week, an Essex pig-farmer called Fergus has decided to try and take some of the OED writers’ jobs into his own hands by ‘requesting that ‘derogatory porcine terms such as ‘pig out’, ‘eat like a pig’ or ‘porker’ are removed from the Oxford English Dictionary’ because they are offensive to the animals.

Fergus said: “As a pig farmer and on behalf of the country’s pigs, we are just a little upset by the fact that people talk about ‘eating like a pig’. It is derogatory. It creates this perception that pork is a fatty meat which is completely incorrect. And this is what has prompted me to get frustrated that people are calling pigs fat because they are not.”

Removing them isn’t going to stop the use of them ?? wonder how the pigs told him it was offensive ?? ????

March 10th was officially Mario Day, due to the fact you can abbreviate it to MAR 10 which, if you look at closely, looks exactly like it spells Mar10 or Mario. Apparently.

To celebrate the occasion, Nintendo has partnered up with Google Maps to replace the normal navigation arrow with Mario in his kart.

Mario will serve only to help steer you to your destination safely, so you won’t have to deal with suddenly finding ink all over your windshield or other drivers hurling red shells and fireballs at you. And should you be at the front of a line of cars, there’s no need to worry about blue shells crushing your dreams, either.

5. Smile for the camera

Did you know: an average millennial is expected to take 25,700 selfies during their lifetime which averages out to at least one selfie per day?! Love or hate all that duck-faced selfie posing, it turns out penguins want in on some of that fun, too. 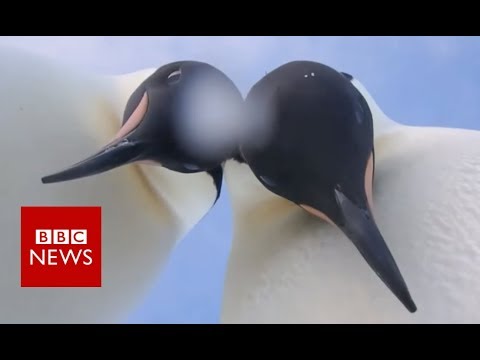