1. Beast from the Yeast

It’s been snowing a fair bit this week and, as per, the entire country has gone into complete meltdown. Closed schools, abandoned cars, and shivering dogs being carried by their owners… are all things I saw on my drive to work this morning.

But that’s nothing compared to what’s going on in Ireland, which is currently experiencing the worst, and probably only, bread crisis on record. A video emerged yesterday of people panic buying bread, and many more images of empty supermarket shelves have been shared on social media throughout the week. Why bread is so high on people’s panic buying list is a mystery to me; I guess people just really like toast, or they’re using it to protect themselves from the cold.

Speaking of bread, Google has made a subtle change to the appearance of its search engine results pages, by adding a clickable breadcrumb trail.

According to a SEJ report, breadcrumbs are triggered by informational search queries, accompanied by images, and further signify Google’s evolution to a mobile-first world. Quite what this update means for marketers is yet to be seen, but we’ll be sure to keep you posted via this blog.

Our physical appearance can reveal a lot about the type of music we’re into. Nowadays I like to keep people guessing by dressing like a 33-year-old father of two; but 15 years ago my baggy jeans, branded t-shirts, and back-to-front cap would have been an obvious nod to my love of terrible rap music.

One Uber driver is using the physical appearance of others to his advantage by curating a series of Spotify playlists, which he thinks will appeal to any type of passenger. These include: ‘White dudes who look like they like rap’ (including Drake, Kanye West, and Kendrick Lamar), ‘Heady bros’ (Including Nirvana, Jimi Hendrix, and Tame Impala), and my personal favourite, ‘Fuc*ing hipsters’ (featuring TOKiMONSTA, Cut Copy, and Baths).

So I just started driving for uber and Lyft and I’ve been getting a lot more compliments on my music since generalizing my passengers by 1 of these 11 playlists pic.twitter.com/WhX1O5wZ4b

4. Being a YouTuber is hard

A poll conducted last year by First Choice revealed that one in three British children aged 6 to 17 want to become a full-time YouTuber when they grow up, which is three times as many as those who want to become a doctor or a nurse.

It’s a depressing statistic, but not at all surprising considering how accessible YouTube is, and how lucrative it can be for its top content creators. Growing up amidst YouTube celebrities like Zoella, Joe Sugg, and PewDiePie, it’s easy to see how teenagers might fancy themselves as the internet’s next phenomenon – if a camera, access to the internet, and a chirpy demeanour – Hiii guuuuys – is all that’s required, then it must be easy, right?

Wrong. Making money from YouTube is harder than ever, with a recent report suggesting that 96.5% of all of those trying to become YouTubers won’t make enough money from advertising to crack the U.S. poverty line ($12,140, or about £8,800). The study also revealed that the top 3% most viewed YouTube channels are drawing an increasing share of viewership, and therefore ad revenue, which is making it harder for the masses to gain a foothold. It’s bad news for all the Zoella wannabes out there, but probably good news for the rest of us who need doctors more than we need videos of enthusiastic children doing eyeliner reviews. More on the subject here.

5. From Pyeongchang to Essex

The Winter Olympics has finished and Team GB came away with a very impressive five medals, one of which wasn’t even bronze. One of those medal winners was snowboarder Billy Morgan, who defied the odds to claim a bronze in the big air event.

Billy’s medal win was even more impressive when you consider that, unlike most other competitors in this event, he lives in a country that is pretty much void of snow and hills. Unlike, say, USA, Canada or Switzerland, the UK is not blessed with the best winter sports training facilities.

This week though, we have the Beast from the East, and here’s Billy taking full advantage of it in a park in Essex. 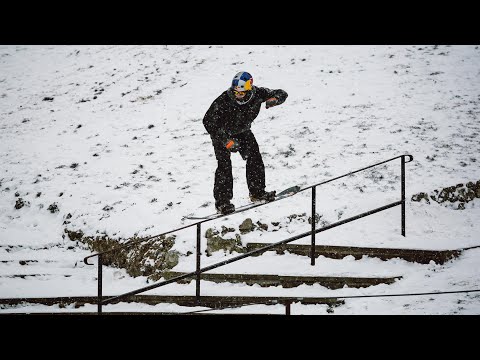