A new statue of Cristiano Ronaldo, that was unveiled at a ceremony to name the Portuguese island of Madeira’s airport after the Real Madrid star, has been the centre of much ridicule on social media this week. In what was supposed to be an honour befitting of an ‘example of excellence’, the event has been overshadowed significantly by this: 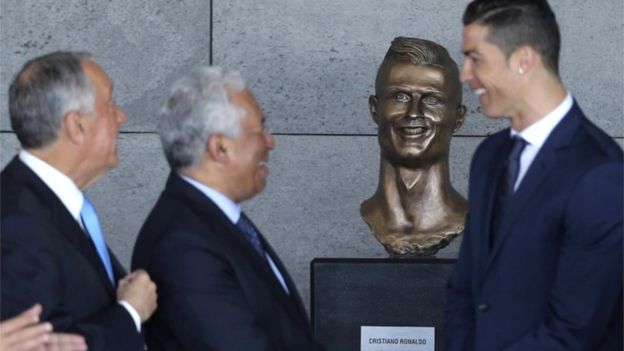 Here are some reactions.

Don't know what all the fuss is about #RonaldoBust pic.twitter.com/sm4EAKYg9w

I don't know what you're talking about guys, I think the Ronaldo statue looks pretty good pic.twitter.com/JIUwQBuqUY

Meanwhile, in Queensland, Australia, a 5-foot bull shark has been found washed up dead (RIP, shark) on the side of a road, following a severe tropical cyclone that ravaged large parts of the state earlier this week.

Think it's safe to go back in the water? Think again! A bull shark washed up in Ayr. Stay out of floodwater. #TCDebbie #ifitsfloodedforgetit pic.twitter.com/DpP29Va1JG

It is believed the shark may have become confused after being caught up in a torrent, which led to it becoming grounded on the side of the road. That’s certainly a plausible explanation, but not half as exciting as the alternative; real-life sharknado…

3. How to lose friends and influence no one

A new social media camp is due to open in Los Angeles that aims to teach teenagers the digital skills they need to become social media influencers. If that sounds terrifying, it’s because it is.

“The more people know you and love you, the more famous you are, right! All you have to do is to let your skill and your personality shine, trust yourself, be consistent and let the social users recognize your uniqueness.”

Urgh. There’s so much wrong with that statement I don’t even know where to start.

I’d argue that if you need to be taught how to be an influencer then you probably don’t have what it takes to be an influencer, but for a relatively small fee of $2,690 I’m sure there will be plenty of impressionable youths queuing up for their slice of instant-fame pie regardless.

Read the original story at www.theguardian.com

US internet users have been left angered this week as it was announced that ISPs (internet service providers) will soon be able to share internet search history with marketers and other third parties without consent.

This is the latest of a sting of Obama-era laws to be scrapped since Trump moved into the White House and it’s fair to say it hasn’t gone down well, particularly amongst internet rights advocates.

Here’s an article explaining what this ruling actually means for those affected.

Warning: if you are currently eating your lunch or drinking a soft drink from a can, look away now. Police are investigating a Coca-Cola factory in Northern Ireland after human waste was found in drinks cans. According to The Guardian, the factory noticed the problem after some machines became ‘clogged’.

I guess the good news is that the issue was identified before any of the offending cans made it to shelves. The bad news is I can no longer bring myself to drink anything from a can ever again.