As the curtains close on 2017, we’re reflecting over the digital marketing challenges, successes, and trends that we’ve experienced throughout the year and applying these lessons to predict what might be in store for us in 2018.

2017 has felt like a year when digital marketing, and particularly search marketing, has progressed from adolescence to adulthood.

What on earth do I mean by this?

Childhood was the ‘new media’ era when digital arrived on the scene kicking and screaming and ready to disrupt. Adolescence was the period during which, whilst still volatile, digital started to prove itself and was increasingly accepted by the old school. Now that digital has reached adulthood, it is respected and is no longer seen as the new kid on the block.

This maturing process has been going on for several years, but it has been very refreshing not to have to talk about keyword ranking reports in 2017 and marketers now have the confidence and experience to appreciate what good digital marketing looks like. I have found myself (thankfully) having discussions about ROI and attribution modelling rather than constantly defending ourselves against unfounded promises from charlatan agencies.

I believe that 2018 will continue this trend and whilst new technologies such as voice search and hyper-personalisation of content (including video) will allow the pioneers to get ahead of the game, I am hopeful that the focus will remain on quality over quantity.

This is especially true for content marketing and, more specifically, influencer marketing which will definitely remain one of the buzzwords in 2018. With ever-increasing volumes of (often rubbish) content, it is becoming harder and harder to earn the attention of those important influencers.

The only answer is to be brilliant – those who really understand the needs of their target audience and create exceptional content will thrive. New technologies will arrive to help, but the key to successful digital marketing will be to cater for your (potential) customers’ needs and interests rather than pin all hope on technology.

In a world of fake news, you can put your trust in PR

The term ‘fake news’ has been pretty inescapable this year – whether in reference to Russian ‘weaponising of information’; accusations of misleading commentary in the BBC’s new Blue Planet series; universities’ false claims of brilliance or Brexit propagandising – it’s prolific. Whilst fake news is itself nothing new, the digital age does mean that it can be spread almost instantaneously at the click of a button.

I am not a fan of this term being used so ubiquitously but I do believe that it has opened a lot of people’s eyes and will make them better question what they believe in future. Therefore my prediction is that consumers are going to be much more intelligent about their news consumption next year and that this will also extend to the ways in which they interact with organisations and in how they research products and services – proof and trust will be the buzzwords of 2018.

The PR industry also needs to scrutinise itself and ensure, as I would hope most professional communicators would do anyway, that they are accurate in the information they share with news outlets and bloggers. We are central in creating fair, honest and authentic news and need to have the integrity to challenge information that we ourselves find questionable.

September 2017 marked the 12 month anniversary of Google’s Penguin 4.0 algorithm update, an annual reminder of how much SEO has changed in recent years. SEO isn’t just about search engines anymore, but increasingly about the needs of users, and those needs are changing fast. Technology is playing a major role in this evolution, with mobile devices leading the charge. Voice search, while still in its infancy, looks set to be big in 2018, while virtual assistants are increasingly providing answers to questions before they’ve even been asked. These trends are being reflected in SERPs, which are now more personalised, more localised, and more answer-led than ever before.

Search is no longer a question, it’s a conversation, and marketers need to ensure they are part of the right conversations going into 2018. This considered, the need for good quality, user-centred content is more important than ever.

Google has been busy adding loads of new features to AdWords in the last 12 months, as well as a significant change to its interface. The ‘new’ look is out of beta so everyone can begin using it, but so far there is no set date for when the old version is going to be completely replaced. I think it’s coming soon though, as I’m being redirected to use the new interface more and more often.

While I am not a huge fan, PPC folk on Twitter were (mostly) more forgiving and saw the changes in a positive light. Here’s what some of them had to say.

Michael, Owner at Quote Goat said: “I have been using Adwords for about 10 years. The first time I switched to the new system and then switched back I knew I was only doing it as I did not want to invest the time in learning a new system. To be fair it can be disruptive to have a system you know suddenly change. However now I have given it a chance and invested a bit of time, I would consider myself a convert. The reason I like the new version is that I find it easier to locate features. Before the update, Google added so many features over the years and clearly had to bolt them on to the old design; I would regularly find it difficult/illogical to locate the feature I needed. The new version has been built with all of these new features in mind and it is, therefore, a lot more intuitive to use.”

Scott from EZ Results echoes Michael’s sentiments about investing the time to adjust to the new interface: “I switched to only using the new version last month. It’s not perfect but I actually prefer it over the old now. Maybe I just got used to it.”

Mark from SEOM Interactive was pleased with some new additions, but not 100% sold: “Overall it’s just not ready. There are a few things I like (promo extensions) which so far, has increased CTR and conversions to a degree for some accounts, but most of the time features are missing and I have to switch back due to time-efficiency. It needs a serious upgrade before it’s ready for a heavy workload.”

PPC specialist Azeem thinks it could benefit from some polishing, too. “It’s got pros and cons. Like many people, I’m switching between the two. I’ve found certain things to be faster (like the shortcut feature = very handy) but it’s still some way off the finished article and ready for a 100% buy in from me.”

However, like me, others were less enthusiastic about the new design: 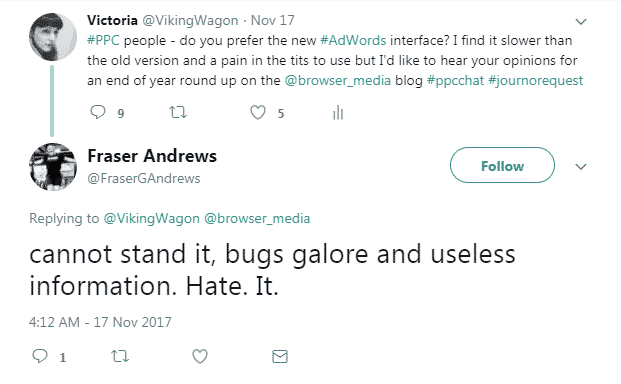 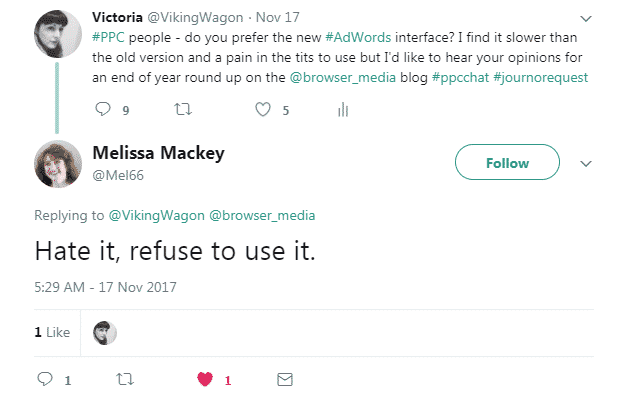 Kevin from Hootsuite had a few comments on the UX: “I find it too drastic of a change. I much prefer the old one, but it’s definitely improved since the beta. May sound silly but I don’t like the new sidebar. I feel before it was more simplistic where now they’ve tried to cram everything from the old sidebar and top navigation into one place”.

And some of us just plain hate it.

Unfortunately for Fraser, Melissa and myself, it’s only a matter of time before the version we have grown to know (and not love, but become familiar with) will soon be redundant.

My prediction for PPC in 2018 is, therefore, that Google AdWords is going to pull out all the stops with new features being added once the new interface fully rolls out, with an increase in automated features and more emphasis on attribution.

2017 saw a rise in simplicity and intuition in design – uncluttered and minimal, accentuated with fun-but-functional animation, making tasks both easy and a pleasure to complete. Usability in 2017 played to our emotions (and I’m not just talking about all those new emoji; we’re fast becoming BFFs with Siri, Cortana, and Amazon’s Alexa, too), and while we’re still pretty far from abandoning the mouse altogether, the move to mobile-first has seen us relying more and more on the thumb-scroll, as well as voice-activated commands.

I think this push to remove any friction from usability has to continue into 2018. Mobile design will prevail in order to stay relevant as users prefer the freedom the technology provides, allowing them to stay connected as they venture back out into the world. Personalisation will become more and more popular as brands move away from a one-size-fits-all approach. I think in the future that CRO and UX specialists will be more like psychologists, working to humanise design and interaction with technology and making it more intuitive and anticipatory, with a focus on syncing with users’ emotions.

2017 saw lots of changes in the world of social media with the majority of platforms innovating and adapting to meet the needs of marketers. Towards the back end of the year, we saw various different trends begin to emerge that look as though they will carry on into the new year. The move from organic reach to paid advertising is something that social media marketers will be aware of and should keep an eye on closely in 2018.

Another area that looks to continue to grow in the next few months is the importance of video content – shocker! Video content is starting to overtake photos in terms of engagement across most social channels and this doesn’t look as like stopping. On top of this, expect to see more brands and advertisers make the most of live video features available across different networks, including Facebook and Twitter.

2017 was a busy year for social media marketing and it’s looking like 2018 is going to be exactly the same.

Right now, brands have infinite opportunities at their disposal to engage customers with their content – websites, blogs, social media, podcasts, webinars, video, the list goes on – Each medium offers a unique way to tell a story, to educate leads, and to turn customers into influencers. Content is becoming increasingly important and for good reasons, too – according to the 2017 benchmarks and trends report from Content Marketing Institute and MarketingProfs, more than 60% of marketers reported that their content marketing strategies are more effective than one year before.

This growth isn’t showing any signs of slowing, the latter part of 2017 has seen significant investment in original content creation from major brands including Apple, Google, Facebook, and Amazon and while we are yet to taste the fruits of their labour, one thing remains absolutely certain: consistent, original, and addictive content across all devices and platforms is all the rage.

As 2018 approaches, newer forms of content marketing are gaining greater traction, including virtual reality, augmented reality, and virtual assistants. With these, content marketing is only set to move forward into a bigger and bolder position in a brand’s overall marketing strategy and those brands which are able to demonstrate a robust content strategy today have every potential to make a significant impact with their dream audiences tomorrow.

It has long been said that content is king, but I believe 2018 will be the year content diversifies its reign to become an emperor – while the king’s power is somewhat refined to a fairly homogenous territory, the emperor wields power over many nations.