Facebook has been annoying businesses since the end of last year, with many reporting a decline in organic reach since the start of 2014 – to put it simply, posts by brands are becoming less visible in users feeds.

Why? Well, the cynical marketers answer is so businesses end up paying for Facebook advertising. The official line from Facebook is that their quality filter has been set higher and the competition for space in a news feed is fiercer.

Facebook claims there are around 1,500 news stories trying to reach your feed and that they only prioritise one fifth of them. Catering to their users rather than brands, Facebook have upped their criteria for business pages to be included in the stories they show – and a bit like Google’s algorithms there is no spam allowed, with high quality, original content being favoured.

This means that businesses have had to look into paid advertising on Facebook to promote many of their posts. Facebook organic reach is tipped to eventually drop off to zero, leaving brands with very little choice other than to pay. Even though the cost of Facebook ads has tripled per impression and ad sales for Facebook has grown by 72%, the effectiveness of Facebook ads hasn’t always been widely celebrated.

An example of this popped up on my news feed last night from a friend of mine who manages a local bar. 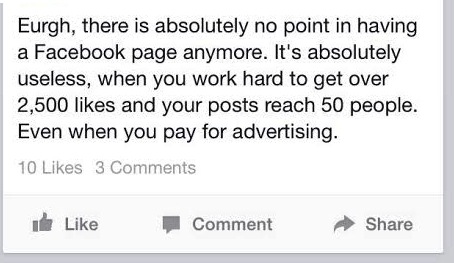 She’s right – I haven’t seen a status by her bar for ages, even though I like the page. I always sort my Facebook feed by ‘most recent’ because I like to see things in a chronological order, so I imagine that I would have had more chance seeing new posts than someone who lets the Facebook algorithm do its thing.

I have 124 friends on Facebook – now as that’s only 24 more than what Facebook sleuths Max and Nev from Catfish consider make up a legitimate profile, I’ll assume it’s a low number. So are there really 1,500 news stories vying for space on my feed?

If the decline of organic reach isn’t bad enough for businesses, there is also talk of giving users the opportunity to unlike a brand too! Which raises the question, should businesses start quitting Facebook? Seems a little extreme to me.

Firstly, having a nice rounded social media presence is a good indicator that a site is relevant and active, plus if you are searching for a business and a well maintained social page doesn’t appear, I would personally find it either entirely inconvenient or a good indicator not to try and find them online/view them as a trustworthy online vendor/etc.

Secondly, as a local business this bar is still receiving a lot of attention via Facebook. On a weekend I see people checking in or tagging themselves in photos on their page, sending the bar into many different news feeds and right onto the screens of their target demographic, all adding to their glorious edgerank.

The addition of Graph Search should help to make life a little easier for local businesses too (although despite reports last November that it was about to hit the UK, it is still yet to roll out). Lastly, as Moz told us, spending a dollar a day on Facebook ads is worth it – regardless of previous ad failings. Moz points out that if you spend just ‘$1 per day on Facebook ads, you will get in front of 4,000 people that wouldn’t have seen you otherwise. If you are doing that and your competitors aren’t, you win the awareness game in your niche.‘

But if you are truly fed up with Facebook turning everything they can into a revenue stream, get ready to educate your fans. For example:

I’ve already started to see this behaviour like this in my news stream, such as this post by a band I have ‘liked’. 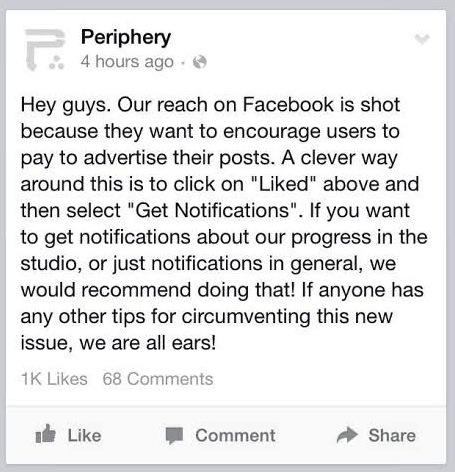 One problem with drawing attention to your page in this way is that now the user has to decide if they want to go out of their way to stay in touch with you, otherwise they don’t even have to unlike your page as you’ll just simply… disappear…

In this example for the band above, I will take the time to continue to connect with them – I want to be the first to know about their tour dates, new records and studio exclusives as they’ve proved their worth to me on social media.

For brand and business pages it is now more important than ever before to post interesting content that people will want to log in for and engage with – using social media as an announcement platform was never the smartest move, but now it’s officially a thing of the past for any brand that doesn’t want to pay for Facebook ads.

Timing is everything when it comes to social media and can ruin an otherwise successful campaign. Here are the best times to post on social media in 2022.

Google Ad updates, Twitter dominating the headlines again and ducks running marathons. It can only be this week’s My Five.