Personally I’ve never been a fan of Love Island, however, love it or hate it, you cannot deny that the show has most of the nation hooked. Whilst the sculpted bodies, scandalous backstabbing and ridiculous conversation topics are what keep viewers entertained during each episode, the show’s roaring success is largely down to something behind the sun-kissed scenes: pure marketing gold.

Here’s 5 top digital marketing tips you can learn from this series:

Whether you’re laughing along with the Islanders or just at them, you cannot deny that Love Island is funny, but so are all the other reality shows cut from the same cloth, so why is this one so popular? Love Island breaks the mould by tapping into a much deeper emotion… lurve.

Romance has always been a popular genre, and in 2015 when the first series of Love Island aired, the ONS estimated that 51% of people in England and Wales were single, providing the perfect market for a prime time dose of dodgy flirting and disastrous dating game play.

In order to be able to tug on the heartstrings of your audience, you need to understand what they want – a nod back to the age old concept of knowing your audience.

Whilst on paper the show seems tailor-made for a young, female audience, Love Island has successfully engaged a wide range of demographics. It’s OK to be a bloke and still enjoy Love Island (I know more male viewers than females, in fact) and it even cuts through class boundaries with many high-powered individuals also tuning in.

In a recent interview, the voice of Love Island, Ian Stirling, admitted that he wasn’t sure he really wanted the gig because of the stigma attached to trashy reality shows:

“I thought the broadsheets and Radio 4 wouldn’t take me seriously if I was the voice of a reality TV show. Ironically, that is now the reason why these people want to talk to me.”

Apart from the obvious aesthetic draw to the programme – most viewers, irrespective of their background, enjoy watching the Love Island shenanigans as it’s a welcome release from the stresses and drabness of the real world. As a result, this year’s lineup included a solicitor, a doctor and a government advisor alongside the textbook personal trainers and model/actors, therefore, appealing to audiences from all walks of life.

It’s not just important to know who your audience is, you need to know where they are too. The endless threads of Love Island discussion on Twitter haven’t gone unnoticed by the show’s research team. The bosses at Love Island have capitalised on this by adding suggestive hashtags to the end of the texts they send to the Islanders, prompting viewers to reuse the hashtags in their own social media post, thus, promoting the show.

The Picture of Dorian Gray by Oscar Wilde

Developing an established community for your brand is the ideal for most companies. Well, Love Island has two: the die-hard fanatics and those that loath everything it stands for. Yet both camps love talking about it.

If you’ve managed to watch any of Good Morning Britain the past few weeks, you’ll have heard Piers Morgan’s incessant moaning about how awful Love Island is and how brainless and shallow the contestants are. He claims to despise the programme branding it utter ‘crap’ however he’s certainly been giving it some regular airtime. 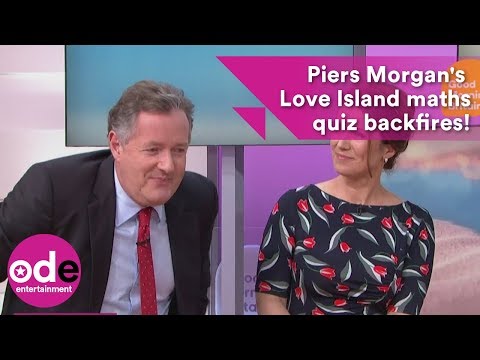 Check out Piers Morgan trying his best to humiliate a female Islander yet getting more egg on his own face. Hilarious.

The lesson here is simple: Create an image for your brand that people are proud to identify with and you’ll soon have the foundations of a blossoming community.

Once you’ve established who your audience is, it’s important to listen to them and act accordingly.

This year the show teamed up with online fashion brand, Missguided, who provided clothing for each of the contestants to wear whilst they are on the island. Knowing that viewers will find fashion inspiration in their favourite Islanders, the official Love Island app allows users to purchase items and accessories they see worn on the show in a matter of touches and swipes, creating a seamless user experience across multiple platforms.

With a reported sales increase of around 40% every evening the show is aired, there’s nothing misguided about this lucrative partnership, plus it gets people sharing pictures of their latest purchase and talking about the show online – win-win for both parties!

One of the key reasons we seem to be surrounded by Love Island promotion is that fans of the show are extremely active in generating and sharing content themselves. It’s likely that most of those watching the latest episode are doing so with a tablet or phone – or both – in their hand(s) joining in the Twitter discussion and general online banter whilst the latest antics are still fresh. As soon as there’s a funny moment or a new catchphrase in the villa, it’s almost instantly followed by a meme, video or mention somewhere online.

By providing inspiration for share-worthy material – be it funny, heart-warming, informative, or just downright peculiar – you’ll encourage your audience to engage with your brand on a much deeper level, particularly if others in the brand community join in the experience.

These are just a few of the valuable marketing principles that can be learnt from this series of Love Island and reapplied to your own marketing strategy. So whilst I won’t be setting a Series Link in my Sky Planner anytime soon, it certainly gets a 5* rating from me for marketing mastery.