Whilst the world of search mulled over how Google’s new so called ‘mobilegeddon’ algorithm update was going to affect us all, the search giant had the last laugh by also updating its algorithm to change the way it assesses quality content. It did this very quietly with no announcement, until this week when it confirmed that some of the ranking changes seen recently will be due to this tweak. The update wasn’t intended to affect one particular type of site over another but thin sites with little content and ‘how to’ sites seem to have been worst hit.

With no specific insights released about the update, it’s difficult to know which specific factors now carry more weight in Google terms. That said, continuing to create useful and unique content which reinforces your thought leadership and authority, is always going to be a winner.

2. A decline in search? Really?

If Carat’s Consumer Connection System (CCS) recent research is to believed, we can all go away and not worry about algorithm updates anyway as apparently fewer people are turning to the web to search for content or products. Supposedly we’re all relying on a handful of trusted sites and recommendations from family and friends instead. Hmmm.

I don’t doubt that this research has been reported accurately and clearly social sharing of content is part of the everyday marketing mix, but it certainly sits at odds with Google’s reporting on the volume of search queries every year. And whilst the trusted sites listed in the research are all very generic in nature (Amazon, BBC etc.), the third most trusted site is Google.

And finally, what if someone wants to research some far flung holiday destination, lesser known fitness regime, or some of the more obscure terms (trombone fetish – yes really!) that people search for, they will want that content to be delivered from a site that is authoritative on that subject, not a generic site or in the case of the trombone lover, a family member.

I’m researching new kitchen lights. I’m very specific about what I want and I’ve spent a lot of time scrolling down long lists of products on my phone. I’ve experienced the whole spectrum of the good, bad and the ugly in terms of user experience but some of the sites that really took poor UX to new heights were those that have infinite scrolling.

This technique, that loads content continuously as the user scrolls down and eliminates the need for pagination, may have its merits for news-type sites but not in my opinion for e-commerce ones. Not only that but some retailers with small product catalogues thought I might be more inclined to buy their products if I saw them over and over again: infinite scrolling on repeat, like a visual broken record. Maybe I wasn’t supposed to notice that I’d seen their industrial scissor arm wall light five times before? Grrr.

The Neilson Norman Group do a good summary of the pros and cons of infinite scrolling but Browser Media’s UX guru Libby Bearman warns businesses about being too gimmicky. She said,

“Web development companies can sometimes be too keen to incorporate new ideas simply to be innovative and creative, rather than because it benefits the client or their users.”

The new account @POTUS will stay with the office and so the newly elected president will take it over in 2016. It reportedly amassed over one million users in less than five hours.

Good job they decided to include the T as it can often be dropped from acronyms: POUS would have been less appropriate.

The World Wild Life Fund has launched a series of endangered emoji, which are aimed at helping to raise money and awareness of specific, at-risk animals such as the Giant Panda, Galapagos Penguin, Maui’s Dolphin and the Sumatran Tiger.

There are 17 emoji to choose from so get tweeting and donating. All together now… aaaaawwwwwww. 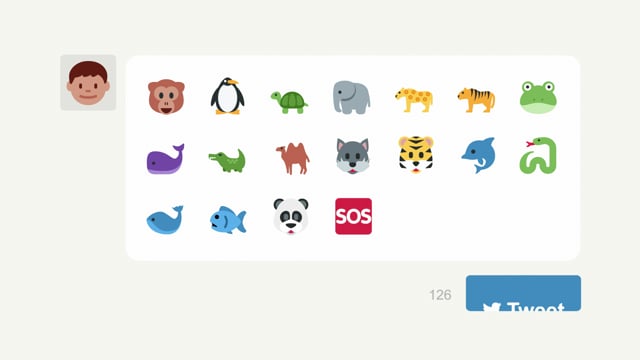