This installment of My Five marks year one of our weekly blog.

To celebrate, we bring you a bumper edition, in which each member of the team has picked something significant from the industry, to give you an insight into all the exciting changes that have happened in the last year:

“As far as Tweets go, this is pretty epic.”

With 791,310 retweets and counting, could this be the most famous tweet of our time?

“I’ve chosen this one because it was big news for us as an agency (which uses Raven Tools), and  it changed how we reported. Plus it highlighted the power of Google who continue to throw their weight around in an effort to police the internet. And stuff. And it was my first My Five so it’s nice and nostalgic too.”

It was announced last Friday (7th December 2012) that Raven Tools is due to drop its rank checking tool. Following a failed Google Adwords audit, Raven was told that it was out of compliance with Google’s terms of service, and ordered to stop its data scraping.

Sound familiar? It wasn’t too long ago that SEOMoz announced that its access to the Google Adwords API had been revoked. Speculation suggests that it was for the same reasons.

With Google increasing the enforcement of its terms of service, all SEO software companies will soon have a difficult choice to make: continue to offer scraped data and risk losing Adwords API access; or comply with Google’s terms of service and follow in the steps of Raven Tools.

“The world is changing at an incredible rate. In just a few short years mobile phones have totally changed the way humans interact. With such an enormous impact on brand/consumer relations and society in general, it’s thrilling to think where technology will take us next.”

April 3 2013 was the 40th birthday of the mobile phone. On that day in 1973, Motorola employee Martin Cooper made a call from a ‘brick’ widely considered to be the first mobile phone call. The device has evolved from being an unwieldy, expensive invention to the central hub of modern everyday life. The smart phone today is almost unrecognisable as a relative of the huge device 40 years ago, but has unarguably revolutionised the way we think, act and socialise. Where will we be in another 40 years?

There is much talk of the infographic being a dinosaur in the SEO world. Personally, I don’t really buy it as an infographic can be a very powerful way of displaying information.

I do, however, agree that a c##p infographic is pointless, but that extends to any content. Poor quality content (created for the search engines rather than users) is not good for anybody and I absolutely agree that quite a large % of infographics are poor, but that should not mean that a good infographic is not celebrated and shared.

It would appear that Econsultancy have also got fed up with questionable infographics as they have announced today that the weekly ‘top 6 infographics’ posts has been retired.  It is not all bad news though as it has been replaced with ‘This week’s finest digital marketing infographic’.

Even better, they have chosen our infographic as the first ever recipient of the honour. I am a little surprised, but very humbled to see it in all its glory. I would also encourage you to head over to our blog post to explain what it is all about, as it needs a bit of context to make sense.

“Various updates made to Google’s ranking algorithm over the past year or so have drastically changed the way which we, and the industry as a whole approach SEO. This particular penguin update was no different.”

On Wednesday 22nd May, Google rolled-out its latest algorithm update, named Penguin 2.0 or Penguin 4: http://www.mattcutts.com/blog/penguin-2-0-rolled-out-today/ It was reported that approximately 2.3% of English-US queries were affected to the degree that a regular user might notice.

The update was said to be targeted at webspam and will decrease rankings for sites that have been violating Google’s existing quality guidelines. This latest roll out is another update to the algorithm, rather than refresh like some of the other Penguin changes, the update aims to reduce webspam from the SERPs and help promote high quality content.

6. Annie: How to prepare for future Google updates (From My Five #39)

“I chose this because it is something which can have a massive effect on the work we have done, the work we plan to do and most of all our clients. I think it shows that we are willing to share best practice hints and tips with the wider SEO community and a sense of ‘we’re all in the same boat’ mentality.”

The ever changing Google goal posts can be very frustrating for the online marketeer.  It’s tempting to keep your eyes shut tight and fingers crossed and hope the ranking and algorithm updates don’t affect your rankings.  Truth is, it probably will.  So what can we learn from the past to help us prepare for future updates?  Moz.com has a nice video explaining just that.

“In just a few decades the way we interpret and interact with the world has changed so much. I picked this because it is a prime example of just how much has changed in terms of the way technology and different platforms have influenced us and how we communicate with each other.”

The world of digital is a fast-paced one, with new platforms emerging all the time and existing platforms looking for ways to extend their functionality. This week, Instagram has announced that it will be showing its first ever film trailer; the epic biopic of Apple co-founder, Steve Jobs.

Three years ago at a Techonomy conference, Google’s Executive Chairman Eric Schmidt boldly stated that every two days we create as much information as we did from the civilisation of time up until 2003.

And user-generated content (I’m looking at you social media) has gatecrashed the ‘content party’ in an exceptional fashion.

Point and case, is an infographic from Qmee showing everything that happens online in 60 seconds during 2013.

“Actually Google Alerts didn’t really go anywhere but they haven’t been particularly user friendly for a couple of months as Google killed off its RSS Feed – Google Reader. So this was great news…”

The upshot of losing Google Reader was that we had no choice but to receive all alerts in to our inbox (deep joy!) However the search engine has just added a Feed delivery option back into its Alerts service. Google Reader isn’t making a comeback but at least you can now manually take the RSS link and add it to your existing Feed. I use Digg Reader as it’s got such a clean interface but that’s just me and it’s just launched an Android App (happy days) but I haven’t had chance to try it as yet.

“As SEO gurus we’re supposed to know the ‘secret formula’ for topping page rankings. But there’s no silver bullet. I chose this because it’s an example of what helps US understand what we can do to aim to get better rankings”

Last week Matt Cutts was asked whether building no-follow links to increase direct traffic could potentially harm a website. Cutts’ reply was ‘no’, however he went on to say that if you spam these links in blog comments and forums, and if there are so many links that it’s considered abusive or manipulative, then Google could take manual action. More here

Because no My Five would be complete without a cat dressed as a shark riding a Roomba. 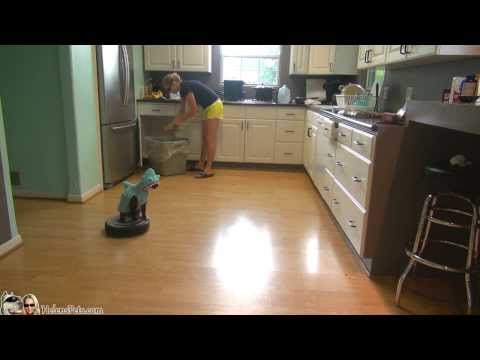