1. Google is clearly a bit miffed over EU ruling

Last Thursday Google began to remove search results as required by the EU ruling which took place in May. The process has continued throughout this week (and to who knows when) but a Google spokesman said that they are “working as quickly as possible to get through the queue”.

Google has also started adding disclaimers to results pages and released a statement. In case you don’t feel like digesting the whole thing, it goes something along the lines of ‘we know this ruling doesn’t affect every page, but we’re going to tell you on every page that you may have been affected because now you’ll wonder if you have incomplete search results and you’ll be as annoyed as we are. *bitter laugh*’.

2. Is ’emotional contagion’ even a real word?
Way back in 2012 Facebook did a secret study which toyed with the emotions and mental well-being of its users. A small change in algorithm meant that around 700,000 users saw only positive or only negative statuses. Facebook then looked at how this affected that persons own status updates. At the beginning of the week the study lost its ‘secret’ prefix and Zuckerberg and co. came heavily under fire for treating users like lab rats.

And the impact of ’emotional contagion’ over the medium of Facebook? When “positive expressions were reduced, people produced fewer positive posts and more negative posts; when negative expressions were reduced, the opposite pattern occurred”. And we can now safely say now that “emotions expressed by others on Facebook influence our own emotions”.

Shockingly, this was a government sponsored survey. When questioning why the American government needs to know this I was left with two thoughts: 1. There is a deep, dark US Government conspiracy behind Facebook which will eventually annihilate privacy policies, cause checking in to be legally compulsory and see Facebook branded retina scanners at the corner of every street, or 2. Obama is just after some proof that Facebook enrages someone else as much as it does him. I hope it’s the second one because, Obama, yes it absolutely does.

3. Matt Cutts vs. Negativity
Four months ago Google gave their first link network penalty in Poland. Yesterday they struck again, penalising two further link networks as tweeted by Google product quality analyst Karolina Kruszy?ska. Matt Cutts soon tweeted confirmation of this, after being asked whether there had been more than one targeted – by saying “Yes. I didn’t tweet about it because people have been asking us to be more positive, but yes.”.

It appears that at least four large networks have been hit, and the kind chaps at Google Poland later posted details on the Google Poland blog about how to submit a reconsideration request after you’ve been hit with a manual action. Seems that Google have had a pretty sassy week all round…..

If you aren’t already familiar with href lang, in the simplest terms: it is a bit of code which you put on your site that tells Google which country & language the site is meant for. The new international tagging report looks at language specific and region specific code, plus it also evaluates return links.

5. USA! USA! USA!
I love America. From the accents and the food, to the national pride and the sports (I’d take baseball over ‘soccer’ any day), I love pretty much everything about the ol’ U S of A. So I’m a little excited that today is the 4th of July, the day where Americans celebrate getting rid of us Brits 238 years ago and show off their incredible patriotism with fireworks, parades, BBQs and a baseball game or two. Hooray!

It’s a bit too early to celebrate with all the social media greatness of the day as the west coast of America is still yet to pour the syrup on their breakfast pancakes, however an internet gem was created on Wednesday that celebrates perhaps the finest American of the moment – US goalkeeper Tim Howard.

After Belgium emerged victorious on Tuesday night, the US bowed graciously out of a World Cup which saw them exceed all expectations (even their coach thought they wouldn’t do very well…). Howard is now being hailed as a national hero all over the internet – in particular at Wikipedia, where a Wikipedia ‘vandal’ made an amusing adjustment to the entry for the US Secretary of Defense. Even Wikipedia founder Jimmy Wales got involved, tweeting “I do NOT APPROVE of vandalizing wikipedia for comedic effect. But this is exquisite: 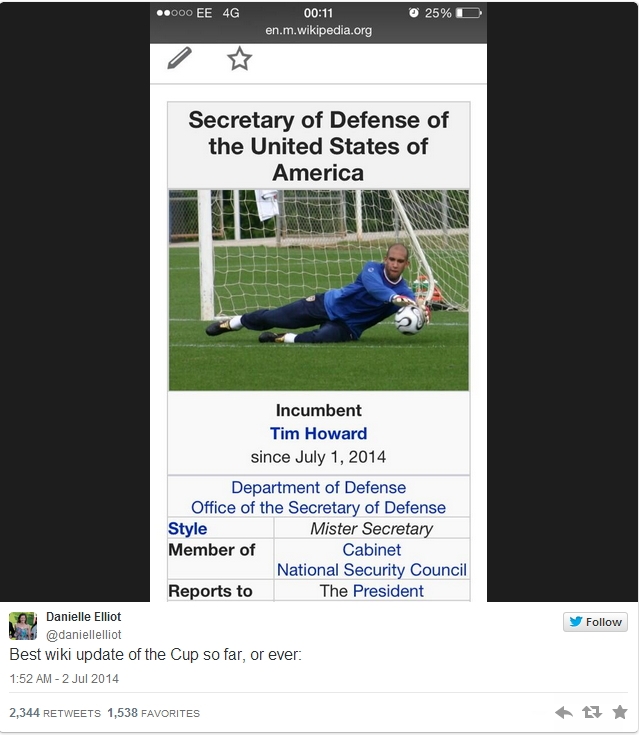