The BRIT Awards took place last week and became the most tweeted about UK TV show ever, with 4.17 million tweets attributed to it even though it had the lowest viewing figures in fifteen years (5 million).

It was also the first UK use of Twitter’s Amplify programme. With 95% of live TV conversation happening on Twitter, the social network has launched real-time, dual-screen sponsorships and in-Tweet video clips from broadcasters. This has already worked in America with ESPN and Ford Fusion bringing fans instant replays in Tweets during every college football game. The idea is that users receive content that enhances their TV experience, broadcasters reach new audiences (via promoted tweets) and brands get to advertise on everything – even your conversations.

For the BRITs VO5 were featured on the exclusive video content shared via twitter, and their hashtag #VO5music was included in 5,332 tweets.

Fox has teamed up with Google to offer fans of American Idol the option of voting for their favourite contestant via search results. Once signed in to a Google account you are able to cast up to fifty votes for each contestant, eliminating the need for an expensive text or phone voting. Voters just need to head to Google, sign in, and search for the keywords ‘American Idol’ or ‘Idol’ during the period of time when the show announces that voting is open.

A sponsored ad will appear, which allows you to click on the image of whoever it is you wish to vote for.

Although American Idol are no longer going to be making money from the phone calls, I would imagine there will be more people becoming involved with the show, and it therefore will give them a larger and more engaged audience. And by demanding that everyone who votes is signed into their Google account, Google have it pretty sweet too.

It was announced this week that only 43 of the the FTSE100 companies have a dedicated mobile site, whilst only two (Tesco and Morrisons) also have a mobile responsive design. The Search Agency research revealed that a total score (out of five) was calculated for the companies based on the load speed, site format, calculated download speed, social media presence, and app presence. US companies scored an average of 2.29 while the UK companies trailed behind on 1.99. Seven companies, including the credit check company Experian, ranked joint bottom of the list with only 0.36 points each.

In 2013 17.4% of global internet usage came from smartphones, with that figure set to rise for 2014. So if you haven’t already made your site mobile friendly, it’s time to!

Richard Branson has been sharing his business knowledge this week, in relation to the 2013 meaningful brands study by Havas which claimed that the majority of people would not care if 73% of brands no longer existed. Branson has said that “the brands that will thrive in the coming years – both financially and in terms of their impact on the globe – are the ones that have a purpose beyond profit”. And why is he saying this? Because he has co-founded a not-for-profit initiative called The B Team, which focuses on people and the planet. He also said he has confidence that the brands ‘people love will be the ones that make a difference to the world’.

I don’t share his confidence in this – people will always buy McVities chocolate digestives because they taste good – not because of any ethical policy they might have. But that said, Microsoft was number three on the 25 Meaningful Brands list – with the Bill & Melinda Gates Foundation having donated over $28 billion to support initiatives in education, world health and population – and Google – with its Google.org charitable arm having committed over $100 million in investments and grants, was at number one.

You can read Richard Bransons blog post in full here.

By now you’ve probably seen the ‘singing kitty’ advert from Three. It turns out that despite looking really computer generated, the cat is actually real – and it’s little mustache too!

In the spirit of animal videos, check out this little guy: a dog that is, quite frankly, terrible at catching a ball. I dare you not to smile at his heroic attempts highlighted by the dramatic music and epic slow motion. 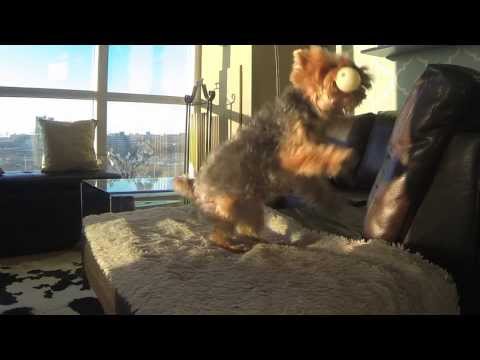